Built in 1910, for Horace E. Dodge (1868-1920) and his wife Anna Thomson (1871-1970). It was designed in the Neo-Jacobean style by Albert Kahn and was named "Rose Terrace" by Mrs Dodge for the roses she planted in abundance on its terraced slopes that dropped down to Lake St. Clair. It was constructed with distinctive red sandstone so that in the family it was referred to simply as "the red house"....
zoom_in 1 images 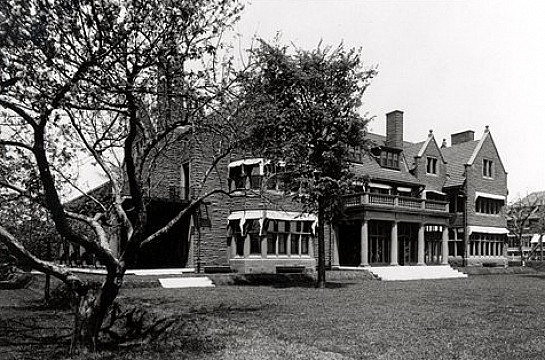 At the end of their pier they kept their yacht, Delphine. on which Horace commuted to and from Detroit. After Horace died in 1920, his widow's taste for art and antiques from 18th Century France increased, but it soon became apparent that their home with its heavy interior, rich in dark panelling, was not a suitable backdrop. In 1931, she replaced "the red house" with her magnificent, Neo-classical palace, also named Rose Terrace.