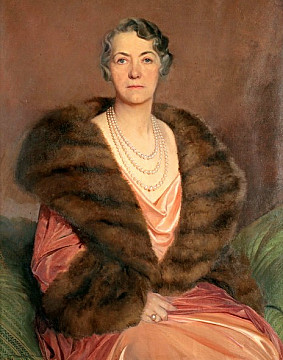 She was born in a rented 2-room apartment off Peddie Street, Dundee. After her father died, her widowed mother emigrated to the States. Musically gifted, as a teenager Anna was able to support them both teaching piano and violin in Detroit, and were it not for how her life panned out she had the talent to become a concert pianist. In 1896, she married a mechanic, Horace E. Dodge, who famously went on to establish the Dodge Motor Company with his brother, John. After the brothers died, their widows sold their shares in the company for $146 million. Investing the money in bonds, this gave her an annual salary of $1.5 million. In the same year (1926), Anna married ex-actor Hugh Dillman, her realtor at Palm Beach and 14-years her junior. They separated by 1940 and were divorced in 1947 when she reverted to being known as "Mrs Anna Dodge" again.

Under the watchful eye of art dealer Joseph Duveen, while building her palatial residence in Grosse Pointe, Rose Terrace, she amassed one of the country's most valuable collections of 18th Century French Art and Antiques, 160-pieces of which are now at the Detroit Institute of Fine Art. She owned jewellery to the value of $6 million, and her collection included a five stranded, 389-pearl necklace that had belonged to Catherine the Great. When entertaining, her trademark pièce de résistance was a Swan cut from ice overflowing with Beluga Caviar. She divided her time between travelling in Europe; the largest private yacht in the States (and still afloat), the 257-foot Delphine; the largest mansion on Palm Beach, Playa Riente; and, the supremely opulent Rose Terrace.

She outlived both her children who died of alcohol-induced excess. After the death of her son,  Horace Jr., she confined herself entirely to Rose Terrace. She died shortly before her 100th birthday although it was reported in the press that she was 103 because reaching 100 had been a milestone she had hoped to achieve. Although she did give a third ($500,000) of her annual income to charity, as a proportion of what she lavished on herself and her family, it was a very small figure. She left a fortune in excess of $100-million to four of her seven grandchildren (three were cut out), but despite her wealth, she never set up any foundations, established any museums, hospitals, or charities. Her largest gift was to the City of Detroit to build a fountain in memory of her husband and son.

The Dodge Collection: Eighteenth-Century French and English Art in the Detroit Institute of Arts By Alan Phipps Darr