Built in 1873, for William M. Stewart (1827-1909) and his first wife Annie Foote (1836-1902). This was the first house put up on DuPont Circle and almost immediately it attracted similarly lavish mansions for which the area became famous. It was demolished to make way for a new mansion that never materialized....
zoom_in 1 images 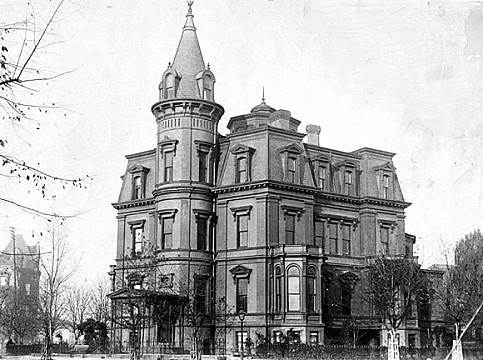 William M. Stewart was the first elected U.S. Senator for Nevada. Educated at Yale University, he became a millionaire by the age of 27 mining gold in California and through significant investments in silver mines. His wife was a daughter of his former business partner, Senator Henry Stuart Foote (1804-1880), 19th Governor of Mississippi.

Stewart employed a well-known Washington architect, Adolf Cluss (1825-1905), to build his city home on a plot of land between Massachusetts and Connecticut Avenues. Giving it the name "Stewart's Castle" it was a typically Victorian Second Empire mansion of three stories over a basement with a mansard roof, a four story turreted tower, and cupola. This extravagant mansion covered 19,000 square feet of living space and on its completion one local reporter said that it surpassed, "in magnificence anything to be seen in this city". Others less charitable dubbed it "Stewart's Folly" owing to its initial isolation.

The Stewarts barely used the house except for a few weeks at a time and from 1875 they briefly lived in San Francisco. In 1879, a fire devastated the house but after extensive repairs it was restored. From 1886 to 1893, the Stewarts leased the house to the Chinese Legation in Washington. In 1899, they finally sold their surplus city residence to William Andrews Clark (1839-1925) who moved up to Washington from the Clark Mansion in Montana. In 1901, he demolished the castle with the intention of building another, but this never happened, and the land was later occupied by a branch of Riggs Bank.