Built circa 1745, for Peter Jay (1704-1782) and his wife, Mary Van Cortlandt (1705-1777). Having leased the land for several years previously, in 1745 they purchased the 250-acre farm from John Budd (1696-1757) naming it "The Locusts" for the tall Locust trees in the front drive which overlooked Long Island Sound. James Fenimore Cooper's second book, The Spy, was inspired by the tales told to him by the Jay's most distinguished son, John Jay concerning the covert operations of British and American forces in the neutral ground around 'The Locusts' during the Revolution. 'The Spy' was the first novel written by an American to become a bestseller both at home and abroad....
zoom_in 1 images 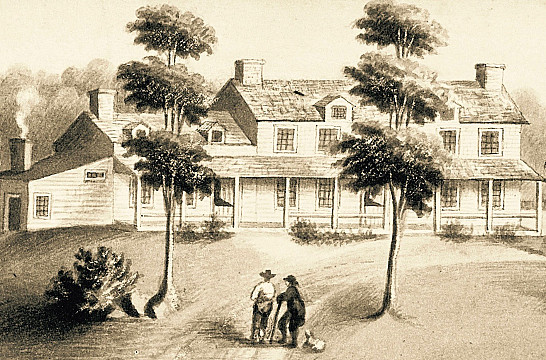 Peter or Pierre Jay, of the "The Locusts," Westchester Co., New York

John Jay grew up here and visited frequently throughout his life, but in adulthood it was his brother, Peter, who made his home here. One notable visit from John was in 1784 after he returned from Europe having drawn up and signed the Treaty of Paris that concluded the American War of Independence. After a church service, all the village returned to The Locusts where a barrel of cider was enjoyed and John Jay was cheered heartily.

While Peter lived here the house was described as being of one story and 80-feet long. He died in 1813 and John then managed the land until 1822 when he transferred ownership to his eldest son, Peter Augustus Jay. He his wife, Mary Rutherfurd Clarkson, and their eight children used the property as a weekend and summer home. In 1832, seven years after his father had died, Peter replaced the house with the magnificent Greek-Revival one that continues to stand in its place today, known as the Jay Estate. Peter incorporated timbers, doors, shutters, and nails from the original house into the new house, completed in 1838.

The Spy By James Fenimore Cooper

American Creation: Triumphs and Tragedies in the Founding of the Republic By Joseph J. Ellis

The Great American House: Tradition for the Way We Live Now By Gil Schafer III