James Fenimore Cooper, Author of "The Last of the Mohicans" etc. 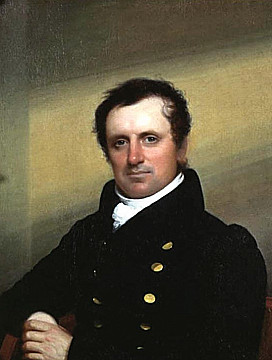 He was born at Burlington, New Jersey, but grew up at the town founded by his father in New York - Cooperstown - in the manor house that he would later transform into Otsego Hall. In 1806, he was expelled from Yale University in his third year for a prank that involved blowing off another student's door and he was sent to be disciplined at sea as a common sailor in the merchant navy. His voyages took him to England and Spain during the Napoleonic Wars, the experience of which helped shaped his later novels. In 1808, he was commissioned as a Midshipman into the U.S. Navy but being restricted to menial tasks and without any adventures he resigned after 2-years which coincided with becoming financially independent after the death of his father.

He was married in 1811 to Susan DeLancey (grand-daughter of James DeLancey, Governor of New York) and having taken to reading to his wife, he decided to put his own writing to the test and published his first novel ("Precaution") in 1820. One year later, he published his second novel ("The Spy"), inspired by the tales told to him by John Jay concerning the covert operations of British and American forces in the neutral ground around The Locusts during the Revolution. It was the first novel written by an American to become a bestseller both at home and abroad. In 1822, he moved his family to New York City and the following year founded the "Bread & Cheese Club" made up of 35 intellectuals involved with the arts. It was also during this time that he published (1826) his classic, "The Last of the Mohicans," one of the most widely read American novels in the 19th Century.

From 1826 to 1833, he lived in London and Paris to promote his books sales, educate his children, and observe customs and politics. He wrote The Red Rover while staying as a guest of the Marquis de Lafayette at Chateau de la Grange-Bleneau. No doubt influenced by Lafayette, his distaste for the power wielded by Europe's aristocracy deepened, but he was inspired by the diversity of Europe's architecture and in 1834 set about transforming Otsego Hall into one of America's first Gothic masterpieces. During the course of his career, Cooper published 57-works which included 33-novels. The best known of these are his five historical novels known as the Leatherstocking Tales. Many of his stories were set at sea and in 1839, among other histories, he published a "History of the Navy of the United States of America". He had seven children (listed above).

The Last of the Mohicans By James Fenimore Cooper