Abraham Schwartz/White, of Corsicana; President of the United Wireless Co. 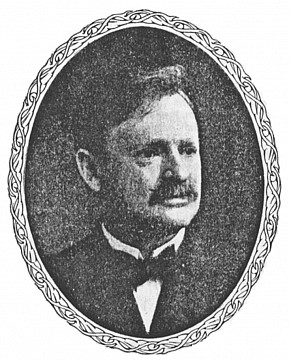 Born Abraham Schwartz in Corsicana, Texas. He started life as a clerk in a dry goods store at Corsicana before becoming a cotton buyer. After falling out with his partner and when several charges were levied against him, he changed his name and relocated to the East. In 1895, he took advantage of the public in a giant stock promotion and fraud involving Cleveland bonds that won him $1.5 million overnight. Passing himself off as a merchant prince, he was "distinguished by his flaming red hair and mustache and his china-blue eyes, and always looking urbane and elegantly dressed in silk hat, chesterfield coat, and a broad gold watch chain across his robust chest".

With his new found wealth, "the very personable" Mr White became President of the DeForest Wireless Telegraph Company when he paid $500,000 for Shadow Lawn. But, within a year he was convicted of larceny and Shadow Lawn was taken back (minus all the silver furnishings that White had stripped out and sold off) when the "Abraham White Realty & Improvement Corporation" was foreclosed in 1908 for failing to pay the seller the $100,000 mortgage. Meanwhile, the DeForest Telegraph Company had become the United Wireless Telegraph Company that for a time was the largest radio communications business in the U.S., until it too went bankrupt in 1912.

White was finally locked up in 1910, but not before threatening to go down to Police Headquarters to tell "Detective Barney McConville to his face that he was 'an unmitigated liar,' and other things, including an invitation to take off his badge and meet him in personal combat". White seemingly ended his days in Federal Penitentiary.