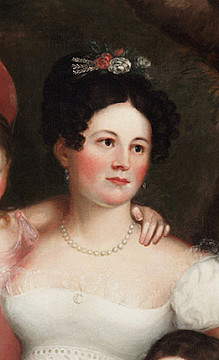 She was described as, "a buxom shop girl" which is true although it also disguises the fact that she was the French-speaking member of an old Virginian planter family. She met the former King of Naples and Spain when she was 18-years old and he was shopping for suspenders at her mother's upmarket shop in Philadelphia. As Bonaparte had had to leave his wife in France, Anne became a regular face at Point Breeze and they would have two children: Pauline died young; and, Catherine, Mrs Zebulon Benton. Although born out of wedlock, Bonaparte treated these two daughters as his own and ensured they lacked nothing. When Bonaparte finally returned to Europe, Anne was paid handsomely not to publish her memoirs! In 1826, Anne married Francois Delafolie who had served Bonaparte as his valet at Point Breeze. In 1832, Bonaparte gave her an estate of 413-acres in New Jersey, a stone cutting business and 15-farm contracts all worth about $12,000. Delafolie squandered almost all her fortune and when he died in 1840, Annette was strongly suspected of his murder. Two years later, she married Henry Horr and they settled New York City where she died. She had 8-children by the three men.