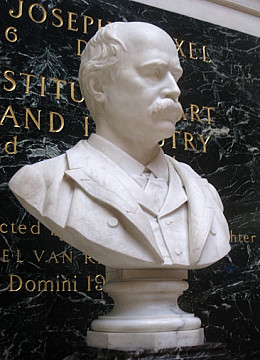 His father had founded the merchant bank Drexel & Co., and having worked for his father in the bank since he was 13, Anthony succeeded him as President in 1863. He closed their branches in Chicago, San Francisco and New York and regrouped under the new name of Drexel Winthrop. After opening a branch in Paris in 1871, they became known as the Drexel Morgan Company, financing investments in both America and Europe. Drexel Morgan created a national capital market for industrial companies and bailed out the U.S. government during the Financial Panic of 1895 and rescued the New York Stock Exchange in the Panic of 1907. The company is known today as JP Morgan and Anthony is perhaps best remembered as the founder of Drexel University in Philadelphia. He married and was the father of nine children.