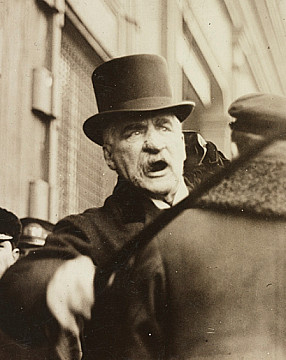 He was born at Hartford, Connecticut, and educated at the English High School in Boston and at the University of Gottingen in Germany. He returned to the United States in 1857 and entered the banking firm of Duncan, Sherman & Co., of New York. In 1860, he became agent and attorney in the United States for George Peabody & Co., of London, of which his father was partner. Four years later, he became partner in Dabney, Morgan & Co. before it became known as Drexel, Morgan & Co. in 1871. His firm was then among the chief negotiators of railroad bonds and active in the reorganization of the West Shore Railroad and its absorption into the New York Central Railroad owned by Billy Vanderbilt. During his career on Wall Street he was the leading force behind many of the country's foremost corporations, eg., U.S. Steel Corporation, International Harvester and General Electric. He held controlling interests in a myriad of other businesses such as AT&T, Western Union and 24 railroads. His dominance over the country's economy gave him influence over the law and in the Panic of 1907 he organized a coalition of financiers that saved the American economy from collapse.

He is widely referred to as "America's Greatest Banker". He was married twice and had 4-children. For some years before she married W.C. Whitney, Mrs Randolph was his on-off mistress. His eldest son, J.P. Morgan Jr., inherited his business empire and the bulk of his estimated $118 million fortune which included his art collection valued at $50 million.

The Hour of Fate: Theodore Roosevelt, J.P. Morgan, and the Battle to Transform American Capitalism By Susan Berfield

The House of Morgan: An American Banking Dynasty and the Rise of Modern Finance By Ron Chernow