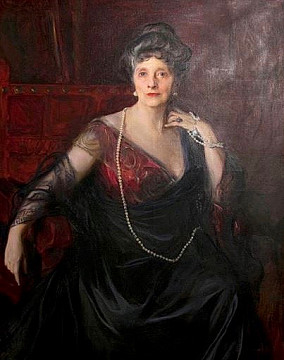 She was born at Tonowanda, near Buffalo, New York, and was brought up in Chicago where her father was one of the founding partners of Hibbard, Spencer, Bartlett & Co., hardware wholesalers. She married her first husband in 1877 and through his inherited wealth they enjoyed a prominent role in society, both in Chicago and Europe. From 2 Calumet Avenue, holding parties for 75-guests was not unusual. Her niece recalled one, 'The Streets of Cairo,' where guests dressed up as Arabs in flowing burnooses: "everything had been transformed with painted scenery of Moorish scenes and moonlight... At the end of the library, completely transformed into this Moorish scene, had been built a stage, and on this appeared a continuous and delightful vaudeville - Russian dancers, trained animals, and last, the famous Sextette from 'Floradora' which was then playing in Chicago... After that the dancing began in the big dining room, and lasted until four or five o'clock in the morning, when we had breakfast and went home".

In Europe she was equally well-known: "Former King Edward VIII attended her London functions when he was Prince of Wales, as did numerous other members of the British Royal family. Many of the best known persons of the day were her guests. Fritz Kreisler and Ignace Paderewski were frequent visitors at her home. There was ever a verve and dash to her parties that seemed to radiate from her own sparkling appearance, heightened by coal black hair, high color, and regal bearing". The fondness and admiration that her neighbor in Chicago, Marshall Field, held for her, had long been one of Chicago's worst kept secrets. So, when Mr Caton dropped dead in 1904, she and Mr Field were married the following year in London. But just five months later, he too was dead. Mr Field made an unusual codicil in his will that allowed $1 million for whoever his widow remarried. When his lawyer inquired why, Field replied quite candidly, "because he'll need it"!

She initially retained both the Field and Caton mansions on Prairie Avenue but after spending an increasing amount of time in Washington D.C. she bought the Pink Palace which became her permanent residence from 1912 until her death in 1937. She was described in her obituary as a Patron of Music and, "one of the first in her set to raise funds for charity by fashionable entertainments. In 1907, she was Chairman of Chicago's Civic Health Commission that oversaw the distribution of milk to the city and organized 55,000 clubwomen in a drive against the adulteration (reducing the quality) of milk. She died at her niece's summer home at Pride's Crossing, Massachusetts. Having no children, she left everything to her niece, Catherine Eddy Beveridge, who was like a daughter to her.