Completed in 1906 as a development project for Mrs John B. Henderson "The Empress of Sixteenth Street" in conjunction with one of Washington's most prolific architects of the Gilded Age, George Oakley Totten Jr. (1866-1939). Standing north of Meridian Hill Park at the northwest corner of Euclid Street, it was inspired by the 15th Century Gothic palazzos that line the canals of Venice. From 1912 to 1937, it was the permanent residence of Mrs Marshall Field, the widow of the department store pioneer and one of the most renowned hostesses of the Gilded Age. Since 1949, its been the headquarters of the Inter-American Defense Board and despite having lost its elaborate balconies, it remains one of the capital's most distinctive and elegant houses....
zoom_in 16 images 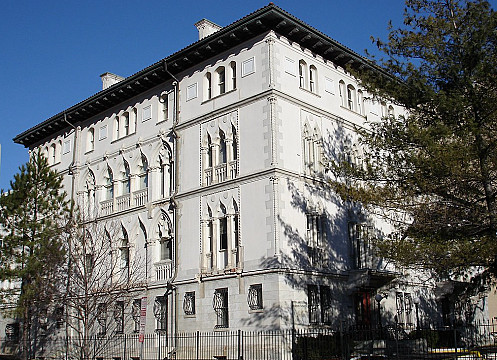 Mary Henderson was the ambitious wife of the U.S. Senator from Missouri, John B. Henderson, and she reigned over Washington society from their imposing stronghold, Henderson Castle. From there Mary spear-headed several movements that aside from beautifying the capital in her vision later included a world-wide campaign against women wearing short skirts and smoking! She teamed up with architect George Oakley Totten Jr. to build several mansions in and around Meridian Hill (then as yet undeveloped) which she sold to foreign governments as embassies. This was the first of these speculative ventures, and having bought the land in 1905 she drew a detailed sketch of what she wanted built here before handing it to Totten to make it into a viable architectural plan.

Mary's decision to build a Venetian palazzo was undoubtedly influenced by her patronage of the artist Lucien Whiting Powell who had travelled extensively in Europe and was, "a prolific painter of Venetian scenes". When she came across his work in a gallery in Washington she immediately declared, "this man is the American Turner, I must know him"! She became his patron around the turn of the century, provided him with a studio within her castle, paid for him to travel, and bought over 200 of his paintings.

Standing four-stories high, the 11,200-square foot house dominates a lot that originally stretched 110-feet along 16th Street and 160-feet along Euclid. There were two gardens bordered by tall hedges and the west garden was centered by a cast-stone dolphin fountain with a basin. The house was not only elaborately decorated, but it was also commendably historically accurate in its decoration. On display there is a rich plethora of marble columns, pilasters, and Gothic colonette balusters with trefoils and acanthus leaves.

Designed as a late 15th Century Italian Palazzo typical of those that line the canals in Venice, it is constructed with marble and terra cotta while its stucco exterior was painted in a rich cream color that when the light caught it at certain times of the day gave off a soft pink hue. Said to have been inspired by the likes of Ca' d'Oro and Palazzo Pisani, stylistically it seems more closely alined to the Palazzo Barbaro. At that time in America, the Barbaro was probably the best-known of all the Venetian palazzos, being the home of Daniel Sargent Curtis and his wife, Ariana, and a magnet to every cultured American. It is almost a given that Lucien Powell would have been familiar with both it and the Curtis'.

If the idea had been to sell the house to Italy as their new embassy, Mrs Henderson would have been disappointed that their legation chose to stay put at Mrs Hearst's former mansion, 1400 New Hampshire Avenue. But, in the same year in which it was complete she succeeded in leasing it to Oscar Straus, the former U.S. Ambassador to the Ottoman Empire and Theodore Roosevelt's newly appointed Secretary of Commerce & Labor - and thereby the first Jew in U.S. history to be given a cabinet position.

Straus returned to New York in 1909 where three years later he would learn that his brother (Isidore, co-owner of Macy's Department Store) and sister-in-law were among those who went down with the Titanic. Isidore had been offered a seat in a lifeboat but refused, not wanting to be made an exception, and his wife just as resolutely refused to be separated from her husband. The new potentate of the Pink Palace was Franklin MacVeagh, U.S. Secretary of the Treasury under President Taft. However, this was just a temporary home while his mansion at 2829 Sixteenth Street was being completed.

In 1912, Mrs Henderson leased the Pink Palace to the no-sooner-than newly-wedded than newly-widowed Mrs (Delia) Marshall Field. Her late husband of just five months was the owner of Chicago's legendary department store, Marshall Field's, while she had long been known as one of the leading hostesses not only in Chicago, but also Europe. It was said, "there was ever a verve and dash to her parties that seemed to radiate from her own sparkling appearance, heightened by coal black hair, high color, and regal bearing". Having long been accustomed to the good life, Field added an unusual codicil to his will: another million to the man who remarries his widow. When asked why, Field - who'd been in love with Delia for many years before they were married - replied, "because he'll need it"!

From 1912, Delia made Washington her permanent residence. In the same year, she brought back George Totten to add a two-story extension (28-feet high, 28-feet wide with a depth of 62-feet) on the north facade to allow for a new ballroom. However, the changes she made to the interior did away with much of its Venetian charm as it was given a Beaux-Arts facelift. The ornate wrought-iron handrail on the stairs was replaced by a wooden banister; a large, ungainly Smoking Room was created by joining up what had been the tea room and library; and, perhaps most significantly, two of the open-air loggias overlooking Euclid Street on the first and second floors were filled-in, boxing out the house in the process. The changes disturbed not only the natural air flow, but also what Totten originally created - a clever play of light and shadow that fell on the interiors.

Whereas Mrs Field had been renowned for her all-night fancy dress parties in Chicago, her entertainments became more dignified with age and the Chicago Tribune considered that, "her fame as a hostess acquired its brightest luster" here. Her menus were always written in French and in 1919 she hosted the Prince of Wales on his first tour of America. Performers at her musicales included the Italian soprano Amelita Galli-Curci, one of the most popular opera-singers of the 20th century; Fritz Kreisler, who is regarded as one of the greatest violinists of all time; and one of France's most celebrated voices - and a favorite subject of Toulouse-Lautrec - Yvette Guilbert, whose programme at the Pink Palace consisted of four "Popular Songs of the 17th and 18th Centuries" and four from "The Crinoline Period (1830)". The Polish pianist, Ignacy Paderewski, also played here while advocating independence for Poland... he later became the Polish Prime Minister!

"A Coterie of Dachshunds"

Having purchased the Pink Palace outright in 1920, when Delia died in 1937 (without children of her own) she left it - along with all of her fortune - to her niece, Catherine Eddy Beveridge, who had been like a daughter to her. Perhaps even more so than her aunt, Catherine had led a life of unbridled privilege and on coming of age had been presented at Court not only in London but in St. Petersburg and Berlin too. But, it was in Washington that she met the man who would become her husband. Having read Russian Advance by the Senator from Indiana, Albert J. Beveridge, she expressed her desire to meet him. She did, and they were married in 1907. From 1912, they settled in Indianapolis but after he died in 1927 she divided her time between Florida, Beverly Farms in Massachusetts, and Zurich in Switzerland - always unfailingly accompanied by, "a coterie of dachshunds"!

Rarely using the Pink Palace, Catherine sold it in 1939 to the Order of the Eastern Star - a Masonic order open to both men and women, as well as those of all faiths. But, seven years later they relocated to the Perry Belmont Mansion and in January, 1946, it was purchased for $104,000 by Mrs Loraine Boley Ingersoll, the wife of Dr William Ingersoll. Aside from being Professor at the Georgetown University School of Dentistry and President of the D.C. Dental Society, Loraine's husband was also the real estate developer responsible for the Willston Center. For two years, Mrs Ingersoll leased the mansion to the Belgian Economic Commission before renting it as an event space for private parties.
"Casa del Soldado" - Home of the Inter-American Defense Board

In August 1949, the Inter-American Defense Board (IADB) - the oldest permanently constituted, international military organization in the world - took up residence. Two years later (1951), they bought it for $115,000, added an office block, painted it in an ivory color and renamed it the "Casa del Soldado" - Spanish for "House of the Soldier". Today, four of the five entities of the IADB operate out of the mansion.

In 1984, the mansion lost its balconies in an irreversible, poorly thought out series of events: part of one the balconies had fallen away but rather than make any repairs, they paid $15,000 to have all the balconies removed. Using crow-bars, sledge hammers, and oxyacetylene torches they were all prized off, smashing many of the decorative motifs in the process. It was then pointed out that unless they restored all the balconies the mansion would lose its landmark status. Plans were made to have fiberglass replicas made in their place - a solution to the eye but incapable of supporting any weight - but today the Venetian palace remains devoid of balconies: stone, fiberglass, or otherwise.

Wild Women of Washington, D.C. A History of Disorderly Conduct from the Ladies of the District By Canden Schwantes

Autumn in Venice: Ernest Hemingway and His Last Muse By Andrea Di Robilant