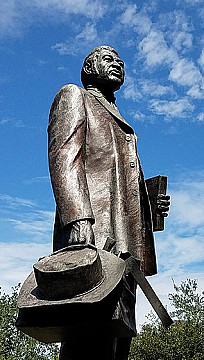 He is said to have been born into slavery at St. Thomas on the Virgin Islands, then a Danish colony - hence his first name. In about 1781, he was bought by a Bermudian sea captain, Joseph Vesey (who is thought to have been descended from slaves himself) who gave him the name "Telemarque". He became Vesey's personal assistant and his interpreter as Vesey traded slaves between Bermuda and Charleston. By the time Captain Vesey settled in Charleston, Denmark was a domestic servant in his household at The Grove and was a familiar face about town. In 1799, Denmark won $1,500 in a local lottery and was able to purchase his freedom for $600 and then established himself as a carpenter. However, despite his best efforts, he was unable to purchase the freedom of his first wife (Beck) and their children who were the property of another slaveowner. In 1818, he co-founded an independent African Methodist Episcopal (AME) Church at Charleston, the first of which had been established in Philadelphia.

In 1822, Denmark was arrested when he was alleged to have been the mastermind behind a planned slave uprising. Controversy still surrounds whether this truly was an attempt to slaughter the white population of Charleston (where black slaves outnumbered the white population by 3-1) before taking ships for Haiti, or if it was in fact a fabrication/ exaggeration by white politicians to spread fear among the minority for their own political gain. There is almost certainly truth to both sides of the story, and certainly with the times being what they were and testimonies being forced out of terrified slaves, Denmark was unlikely to have received a 'fair trial'. He and 35 others were sentenced to hang, and the church he co-founded was burned down by city orders and its minister expelled.

The "Denmark Vesey House" at 56 Bull Street in Charleston was listed in 1976 as a National Historic Landmark, but it has since been proven not to have been his home. He lived in the same vicinity, but he was hung at least ten years before it was built. It is another example of the conflicting stories that surround his life, of which really very little fact is truly known, eg., there is no record of what he even looked like. For almost 20-years before his statue was unveiled at Hampton Park in 2014, it divided - and continues to divide - opinion across Charleston. Charleston's longest-serving Mayor, Joe Riley, perhaps best sums him up: "There are different sides to the story... But in any event, he was a free black man trying to help enslaved Africans and it cost him his life".

Denmark Vesey’s Garden: Slavery and Memory in the Cradle of the Confederacy By Ethan J. Kytle & Blain Roberts

Denmark Vesey: The Buried Story of America's Largest Slave Rebellion and the Man Who Led It By David Robertson