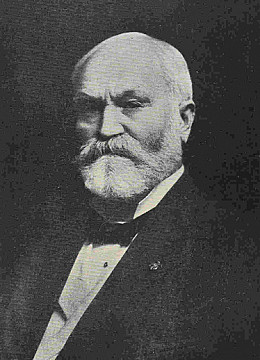 The early life of John A. McGill, is to be taken with a pinch of salt. Certainly the extended family he conjured up for himself was quite brazenly fictitious - see notes within the history of the McGill House. He was the son of Robert Sinclair McGill (1811-1893), who he states came from Glasgow to Toronto in 1815. Dr McGill was said to have been educated privately and at the Galt Collegiate Institute (one of the top schools in Ontario). He served as a private in the Fenian Raids of 1866. He then states that he graduated (1874) from the Cleveland (Ohio) University School of Medicine before setting up as a a physician at Attica, New York. There, in 1876, he married his wife, Carrie, the daughter of a drugstore owner at South Bend, Indiana. They returned to South Bend for several years before coming to Chicago in 1889.

Dr McGill made great substance of being tee-total having never drunk, "a mouthful of whisky, brandy, gin or rum in all his life and in his practice as a physician never prescribing it". In Chicago, McGill set up a private practice as well as establishing the firm of Dr John A. McGill & Co., which he ran with his wife. They soon made their fortune selling "miracle" remedies - all made with alcohol - at their laboratories at 20th Street & Indiana Avenue. One of their most popular products was "Orange Blossom Suppositories" which were billed as, "a positive cure for ALL female diseases"! Despite being what we would term as a "Quack" these days, his career remained otherwise in tact, or at least certainly during his lifetime. By 1938, however, he featured prominently in "Quacks & Quackery" published by the American Medical Association Bureau of Investigation.

Dr. McGill was three times unanimously elected President of the Illinois St. Andrew Society and filled the office with, "efficiency and ability". He was President of the Canadian Veterans’ Association, having served as a private during the Fenian Raids in 1866. He was Scottish Rite Mason, "a thirty-second degree" Mason, and a "Sir Noble of the Mystic Shrine". He lived with his family between the McGill House in Chicago and Seven Acres at Sister Lakes, Van Buren County, Michigan. He travelled extensively (proudly listing Scotland, Rome, Mexico City, Florida, Pasadena etc.) and, "at one time was quite a violinist". He was a member of the Hamilton Club and the Chicago Press Club.

The Devil in the White City: Murder, Magic, and Madness at the Fair That Changed America By Erik Larson

Charlatan: America's Most Dangerous Huckster, the Man Who Pursued Him, and the Age of Flimflam By Pope Brock

Empire of Deception: The Incredible Story of a Master Swindler Who Seduced a City and Captivated the Nation By Dean Jobb