Completed in 1891, for the physician Dr John A. McGill (1842-1924) and his wife and business partner, Carrie Coonley (1847-1925). Their beautiful 20,000 square-foot chateau is made of the same Bedford limestone that the architect, Henry Ives Cobb (1859-1931), used for the University of Chicago. Recognized as one of the grandest Gilded Age mansions in the exclusive Kenwood neighborhood - and one of the very few in Chicago built in the Chateauesque style - the McGill House today is an important Chicago Landmark. Two additions have since been made and it is now home to 34 elegant residential condominiums, known as the "McGill Parc Condominiums"....
zoom_in 7 images 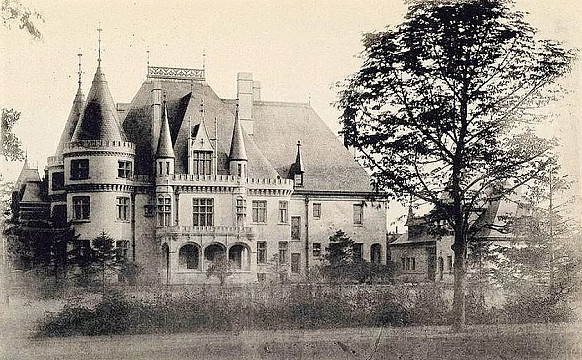 Dr McGill was a native of Toronto whose biographies (which are almost certainly taken from his word) claim - quite incorrectly - that James McGill (1744-1813), whose bequest established Montreal's McGill University, and Peter McGill (1789-1860), the President of the Bank of Montreal, were the "sons of his grandfather's brother". In fact, these two men were not even nearly related to one another, and neither were they at all to Dr McGill!

In his day, Dr McGill was lauded in gushing terms as "one of the most respected and successful physicians of Chicago" who left behind him "a wonderful record" and was even said to have been "beloved". He was in fact, a "Quack". Under the name of Dr John A. McGill & Co., he and his wife - the daughter of a drugstore owner in South Bend, Indiana - made their fortune selling "miracle" remedies concocted at their laboratories on the corner of 20th Street and Indiana Avenue. One of these was "Orange Blossom Suppositories" billed as "a positive cure for ALL female diseases," though in 1915 they were found guilty for misbranding that particular medicine and fined a whopping... $50!

Construction started on the mansion in 1890. On completion a contemporary critic, C.E. Jenkins wrote praisingly of it in the Inland Architect, "the whole effect is most dignified and beautiful... (displaying) to a high degree how much can be done by following style. The slightest intrusion, the least attempt at the creative, would ruin the charming effect".

Perhaps Carrie's conscience got the better of her towards the end of hers days: the year after her death (1926) either she or their only daughter, Harriet, left the chateau to the Y.M.C.A. That year, set back from the main building, an annex in the same chateau style was added by the firm Berlin & Swern, becoming the "Carrie McGill Memorial YMCA".

In 1971, The McGill House became a nursing home before sinking into the depths of dereliction when it was described as a "a cultist hangout". Grace came in 1982 when it was tastefully converted into 34 elegant condominiums by Carl R. Klimak & Associates.

Chicago's Grand Hotels: The Palmer House, The Drake, and The Hilton Chicago By Robert V. Allegrini