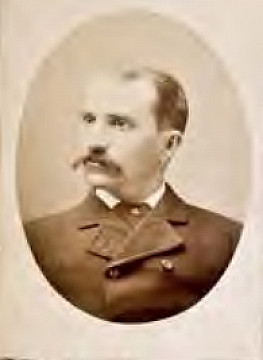 He was born in Talbot County, Maryland. He was descended on all sides of his family from Maryland's aristocracy, which included a profusion of Tilghmans. He grew up at Ellenborough in the house built by his father which he then inherited after his marriage in 1885. He was educated at Maryland Agricultural College and in 1869 graduated from the University of Virginia. Among other livestock, he raised Oxford Down sheep, winning several awards and serving as President of the National Oxford Downs Association. He was also on the Board of Trustees of the Maryland Experiment Station and his alma mater, Maryland Agricultural College. He was one of the four travelling companions of the travel journalist John Lewis Thomas as they took a private car to tour the American railroads. His wife (also his cousin, which was almost a tradition in their family) was Mary Hill Goldsborough and they had six children. Their home, the original Ellenborough, was lost to fire in 1905 - replaced in 1928 by the present day Ellenborough that plays the role of the Cleary house in the movie Wedding Crashers. In 1906, they built Canterbury Manor on Bailey's Neck overlooking Trippe's Creek.