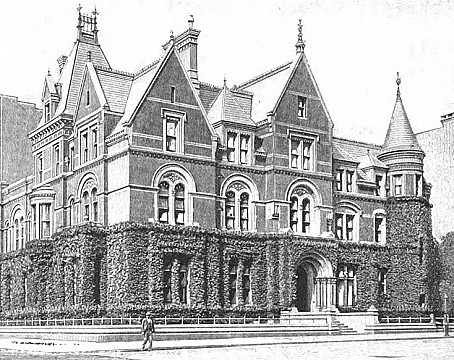 He was born in New York City and after graduating from Yale lived abroad for three years spending most of his time in Berlin. Returning to New York he entered Columbia Law School (1861) before withdrawing for active service with the 22nd New York Militia. He resigned and travelled again to Europe for just under a year before returning to complete law school and graduating in 1864. He had a small practice in New York City, preferring to devote his time to managing his estate while also sitting on various boards. He was a director of Chemical National Bank; Gallatin National Bank; Bank for Savings (also serving as Vice-President); New York Gas Light Company which became the Consolidated Gas Company; and, Eagle Fire Insurance Company. He was a trustee of the Bank of New York & Trust Company, and the New York Free Circulating Library. He was also affiliated with the New York Public Library, the University Club and St. James Church. In 1861, he married Adele, daughter of Joseph Sampson, Co-Founder of the Chemical Bank. They had 4-children who survived childhood and were legally separated in 1886. In 1904, he married  Alice, daughter of Daniel J. Seely, of St John, New Brunswick, by whom he had one further daughter. He lived from 1876 at 2 W. 57th Street.