Joseph Sampson, Co-Founder of the Chemical Bank of New York 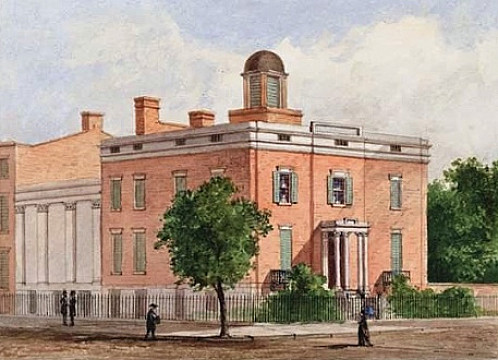 He was born at Plympton, Massachusetts, and came to New York as an apprentice in the auction house of Boggs & Livingston, which by 1830 was known as Joseph Sampson & Co. In 1824, he co-founded the Chemical Bank of New York, owning one-tenth of the capital stock which very quickly made him "fabulously wealthy" and he retired from active business life soon after. When he died in 1872, he was a director - and among the largest stockholders - of the New York Life Insurance & Trust Company; Bank of Commerce; New York Gas Light Company; and, the Eagle Fire Company.

In 1840, he paid $70,000 for Samuel Ward's house at 2 Bond Street (above) which led John Jacob Astor to remark that he, "did not know that there was any one in New York who could afford to pay such a price for a residence". The Sampson house became, "the rendezvous of the wealthy set in the fifties". In 1863, The New York Times listed his annual income at $152,848 - roughly $3 million in today's terms. In 1831, he married Adele, daughter of Lt.-Colonel John Walter Livingston of Skaneateles. In 1846, five years after she died, he married Emily Apthorp who was then resident at the Elizabeth Apthorp House in New Haven. His only daughter, Adele, married first Frederick W. Stevens before divorcing him to marry Maurice de Talleyrand-Périgord, 4th Duke of Dino.