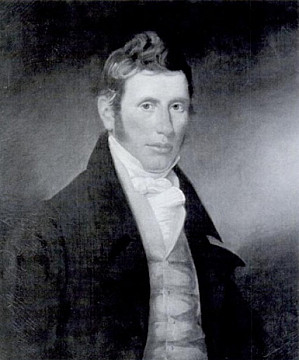 He was born in Stirlingshire, Scotland, the son of Donald McAlpin. He was an architect/builder and emigrated to Charleston in 1804. He did not become an American citizen until 1819 so prior to that date his land purchases were done on his behalf by his attorney, William I. Scott. In 1814, Scott purchased the Hermitage Plantation one mile from Savannah and it was officially signed over to McAlpin in 1819. He immediately set about improving its existing brick manufacturing plant and laying one of the country's earliest railroads to speed up production. After Savannah suffered a devastating fire in 1820, the city turned to McAlpin for the bricks needed to rebuild it. The bricks produced by his labor force of 172-slaves are known as "Savannah Gray" for their distinctive hue. Once cheap, they are now highly sought after. McAlpin expanded the Hermitage plantation to 600-acres and in addition to a new brickyard built an iron foundry, saw mill and rice mill. McAlpin was a progressive slave-owner: he advocated the "task system" over the "gang system" meaning that rather than being forced to work every hour of the day, slaves were assigned daily tasks and when completed the rest of the day was theirs. He never broke up slave families and he allowed old slaves to remain in their homes on the plantation. By the time McAlpin died in 1851, he was worth some $130,000. His first wife was the daughter of Mary Melrose. In 1820, he was married again to Ellen, daughter of Joseph McInnis (1772-1851), of Charleston. They had six children.

Image from the Telfair Museum of Art, Savannah