Built circa 1825, for Henry McAlpin (1777-1851) and his wife, Ellen McInnis (1801-1831), of Charleston. In 1814, McAlpin purchased The Hermitage for $1,500 from the debt-ridden estate of the late Jean de Bérard de Moquet (1762-1814), Marquis de Montalet, a French aristocrat and refugee from Santa Domingo who'd charmed Savannah society. At that time, the plantation consisted of 220-acres run by 65-slaves who manufactured bricks and cultivated cotton. McAlpin was a Scots-born architect and builder who did much to industrialize the plantation. Increasing the property to 600-acres with 172-slaves, he ramped up the brickyard's output and lay one of the country's earliest railroads while also building an iron foundry and sawmill. As much to demonstrate the quality of the bricks that became famous as "Savannah Gray," he replaced the existing old plantation home with a new mansion, classically-designed by his friend William Jay....
zoom_in 11 images 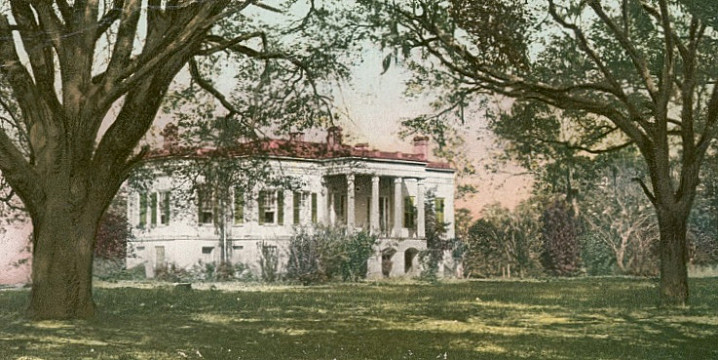 McAlpin built a classical villa overlooking the Savannah River at the rear and approached in front by an alley of oaks one mile in length. A contemporary recalled that it displayed, "a style of architecture which indicates abundant means and cultivated taste, bordering on the aristocratic order". The principal exterior features were the double, curving marble staircases that descended from each of the porches. Internally, both floors were laid out on a center-hall plan. The ground floor contained the dining room and a reception room plus servants quarters, kitchens and wine cellars. The hall of the upper floor opened up on to a double drawing room and library on one side, and five bedrooms on the other.

Henry McAlpin died in 1854. He left his estate to be divided equally between his six children but it was decided that his eldest son, Angus, was best suited to run it. He and his brothers formed A. McAlpin & Brothers to operate the ever-growing plantation as a business. But, when Civil War erupted, Angus left to fight for the Confederacy. His wife stayed on until a cannonball landed in the garden; burying their valuables under a tree, she left with her children to safer confines. In 1865, part of the Union's XX Corps used it as their headquarters when much of the expensive furniture was burned for firewood.

At the conclusion of the war, the McAlpins lost the plantation to foreclosure and it was acquired by Aaron Champion (1792-1881), the father-in-law of Angus' brother, James. Champion gave title to his daughter, Maria, but rather than live there the McAlpins made their home at a townhouse on Orleans Square and the damaged mansion was abandoned.

When Mrs James (Maria Champion) McAlpin died she left the plantation to be equally divided between her five children. By 1903, her son, Judge Henry McAlpin (1860-1931), had taken up residence there with his wife, Isabel E. Wilbur, until she died in 1909. He then moved back to Orleans Square and the mansion was once again deserted. There were mumblings about preserving the mansion as an historic structure but it came to nothing and the land was leased to a railroad and chemical company before 19-acres of its river frontage was sold to the Diamond Match Company for a mere $100 in 1919.

Judge McAlpin died in 1931 and his heirs sold what remained of the property to the City of Savannah. It was again briefly mooted that perhaps it should be preserved, but in 1934 the City sold it for $10,000 to the celebrated car manufacturer from Detroit, Henry Ford. Ford carefully demolished the mansion and removed it bricks to Richmond Hill where he reused them to build the mansion at the Ford Plantation. He also removed two of the brick slave huts and placed them in his museum at Fair Lane in Dearborn, Michigan.

Lost Plantations of the South By Marc R. Matrana

Savannah River Plantations: Photographs from the Collection of the Georgia Historical Society By Frank T. Wheeler

Lost Savannah: Photographs from the Collection of the Georgia Historical Society By Luciana M. Spracher