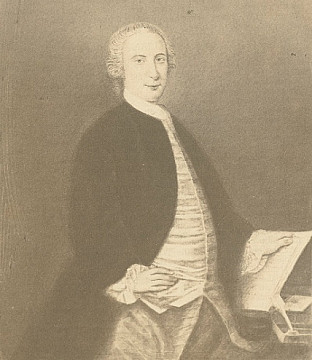 He was born at New York City, the grandson of an acting Governor of New York and great-grandson of the Governor of Delaware and Pennsylvania. James was a successful merchant who lived and kept offices on Hanover Square in New York City - precisely four miles from his country seat, Mount Pleasant. In 1775, he was one of the “General Committee of One Hundred” that took charge of the city until a Provincial Congress could be assembled. He briefly served as a 2nd Lieutenant in Captain Lott's Company (known as "The Sportsman's Company") but after the British took New York he settled on a farm at Esopus and devoted himself to the education of his children. In 1777, at Esopus, he sat as a Member of the City and Council of New York that met at Kingston, Ulster County, to draft a Constitution for the State of New York. In 1784, he established a business importing dry goods with his sons, known as James Beekman & Sons. He was married in 1752 to Jane Keteltas, "a very clever and accomplished woman," who kept the books for their mercantile business. They had twelve children, survived by ten (above).