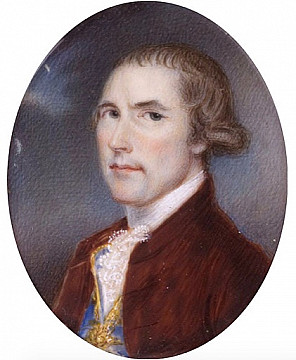 He was born at Skinner's Close, Edinburgh, the nephew of the 11th Chief of Clan Macpherson. He went to sea at an early age and by 1750 was a ship's captain engaged in trade between Philadelphia and Barbados. From 1757, during the French & Indian War he was given the command of the 20-gun Britannia and a writ from the King George III granting him permission to attack and capture any enemy boats. In 1758, the Britannia did battle with a French 36-gunner and came off considerably the worse: Macpherson's right arm was blown off by a cannonball and the surgeon became the only officer in command after all the others were wounded. When the French boarded, they found the deck strewn with 70 of the crew either dead or dying: "The action of the Frenchmen was inhuman. They carried the first and second officers on board their own vessel, cut down the masts and rigging, threw the cannon and ammunition overboard, and then set the vessel adrift. The crew managed to get up jury-masts, and navigated the ship into Jamaica, where it was found that 270-shots had passed (through) the Britannia".

In 1759, Macpherson made up for his losses and took 18-prizes that year including two French sloops laden with plate and valuables besides £18,000 in cash. In 1760-61, Macpherson took 9-prizes worth £15,000, and by strength of superior sailing managed to escape a French 60-gun Man-of-War. After carrying two 10-gun French privateers into Antigua and two Spanish vessels laden with indigo and sugar, the Antiguan government awarded him a sword of honor. In just three years (1757 to 1760) Macpherson amassed a fortune through privateering in the Caribbean between Martinique, St. Eustache, and Antigua. That fortune allowed him to build Mount Pleasant in Philadelphia. He resigned his commission in July, 1762, having been seriously injured nine times which included having his arm shot off twice, and a shot through the leg. Though no longer a naval officer, he continued to trade in the West Indies after the war.

He was as erudite as he was swashbuckling: He published America's first trade paper, Price Current, in which merchants and traders could list prices on their stock. In 1785, he also published the first directory of numbered houses in Philadelphia. He gave lectures on astronomy and natural philosophy that covered topics such the nature of air, magnetism, electricity, and mechanics. He married twice and had nine surviving children.

The Republic of Pirates: Being the True and Surprising Story of the Caribbean Pirates and the Man Who Brought Them Down By Colin Woodard