Completed in 1763 for Captain John Macpherson (1726-1792) and his first wife Margaret Rogers (1732-1770). He was a nephew of the 11th Chief of Clan Cluny Macpherson and originally named the house "Clunie" for his family’s ancestral seat in Scotland before changing it to "Mount Pleasant". He situated his home high atop the cliffs overlooking the Schuylkill River. U.S. President John Adams (1735-1826) visited the house in 1775 and described it as the, “most elegant seat in Pennsylvania”....
zoom_in 11 images 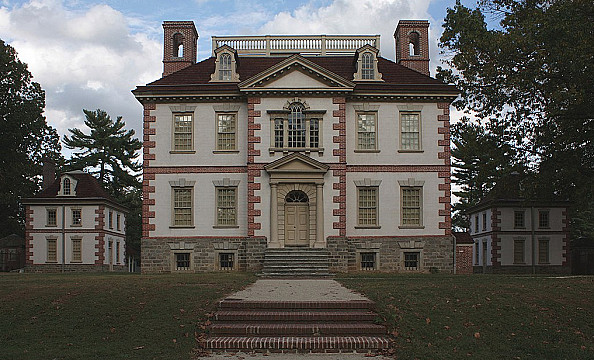 There aren't many mansions that don't cost "an arm and a leg" but there must be very few that mean it quite so literally: Captain John Macpherson came to America from Edinburgh in 1746 and four years later was given command of the 20-gun "Britannia" and granted a license ("a writ of marque") by King George III to attack and capture any ship belonging to a country with whom Britain was at war. In just three years between 1757 and 1760, Macpherson amassed the fortune that allowed him to build this house through privateering in the Caribbean. Despite the fortune he won, it cost him his right arm - blown off by a cannonball, twice - and a gun shot that went clean through his leg!

The entrance to his Georgian mansion is topped by an elaborate pediment, supported by two Doric columns and the roof is crowned by a balustrade with prominent dormers and two large chimneys. Flanking the main house are two small pavilions - an office and a summer kitchen. The house bears a striking similarity to nearby Cliveden in Germantown, but, it is the interior that makes this house exceptional: every doorway is crowned by a pediment and it retains all its original panelling and ornamental carving.

Unfortunately for Macpherson, barely ten years after making his fortune he fell on hard times. In the mid 1770s, he was forced to lease the house to the Spanish Ambassador, Don Juan de Miralles (d.1780). In 1779, Washington's newly appointed Military Commander at Philadelphia, the soon-to-be notorious "Traitor" General Benedict Arnold purchased the house for his new wife, Peggy Shippen who came from one of the city's most prominent Loyalist families. They used the house as their country estate for two years during which time they were said to have entertained lavishly. But, in 1780, Arnold famously defected to the British and Mount Pleasant, along with his other properties, was confiscated.

In 1781, the house was conveyed to Colonel Richard Hampton who sold it on two years later to Blair McClenachan, then of Cliveden. The house remained unoccupied until 1784 when it was bought by Arnold’s father-in-law, Chief Justice Edward Shippen IV, perhaps in the hope that his daughter would return from exile in London. But, it changed hands again in 1791 when it was sold at Sheriff's sale to Colonel Jonathan Williams, the first Super-Intendant of West Point Military Academy and grand-nephew of Benjamin Franklin. When he died in 1815, he left the house and its 35-acres to his son Henry.

By 1854, the grounds had been reduced to just 5-acres after Henry Williams sold off the other thirty to the Granite Land Company and in 1868 Mount Pleasant ceased to be a private home when it was sold to Fairmount Park. From 1878 to 1900, it was a dairy providing fresh milk and ice cream to city children, and in 1906 it became the headquarters for "La Moviganta Klubo," a ladies automobile club.

Today Mount Pleasant contains many souvenirs of Macpherson’s exciting life and times as a privateer who attacked French merchant ships in Caribbean during the French and Indian War. The period furniture on display is from the collections of the Philadelphia Museum of Art who maintain the house. Mount Pleasant gives an excellent insight into the lifestyles of the colonial upper class in eighteenth century North America and the house was named a National Historic Landmark in 1974.

Historic Houses of Philadelphia : A Tour of the Region's Museum Homes By Roger W. Moss

City in a Park: A History of Philadelphia's Fairmount Park System By James Mclelland & Lynn Miller

The Republic of Pirates: Being the True and Surprising Story of the Caribbean Pirates and the Man Who Brought Them Down By Colin Woodard

Valiant Ambition: George Washington, Benedict Arnold, and the Fate of the American Revolution By Nathaniel Philbrick