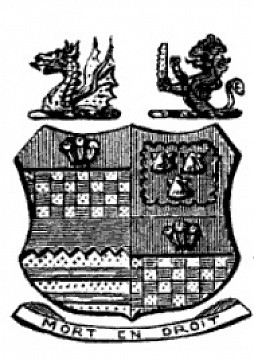 He was brought up at Olantigh Towers in Kent. He was married in 1827 to the heiress Jane Erle-Drax-Grosvenor, twelve years his senior, and the following year he assumed the surname and arms of "Erle-Drax" and by doing so inherited all their estates: Drax Hall, Barbados; Ellerton Abbey, Yorkshire; and Charborough House, Dorset. He was often referred to as "the wicked squire". He was a Captain in the East Kent Militia and in consequence of the Bristol Riots maintained a troop of Yeomanry known as the "Charborough Troop". He was Master of the Blackmore Vale Hunt, ordering its members to dress in yellow coats with blue collars instead of the usual scarlet, while insisting the hunt staff were mounted on grey horses. It was put politely that some of the other Dorset hunt masters, "thought this a little ostentatious".

He was Justice of the Peace and Deputy Lieutenant for Dorset, and for 34-years (on-and-off between 1841 and 1880) he was the M.P. for Wareham, although Hansard records that during that time he made precisely "0" speeches on behalf of the good people of Wareham! In fact, the only time he did anything that could be called vaguely political was when Wareham (a notorious 'rotten borough') was nearly disenfranchised after the Reform Act of 1832. When John lost the Wareham seat for the last time in 1880, he was said to have left the town cursing its inhabitants and vowing never to return.

The Drax Hall plantation made him an average yearly net profit of £3,591 (£420,000 in today's money) and when slavery was abolished in 1836 he received just over £4,293 in compensation for his 189-slaves, although otherwise business continued as usual at Drax Hall with cheaply hired help. Perhaps then unsurprisingly, he "spent money prodigiously" on Charborough, using 2-million bricks to build the park's famously long boundary wall while also constructing the "Stag Gate" and the "Lion Gate" entrance arches.

In the grounds, he planted trees extensively and laid out the High Wood plantation of specimen trees. When the tower built by his wife's grandfather, Edward Erle-Drax, was damaged by lightening in 1838, he rebuilt it adding a further 40-feet in the process, raising it to an even more conspicuous 120-feet. Inside, he added the armoury that he filled with weapons and the picture gallery, which among fine paintings he furnished with his own collection of early Tudor wood-carved panels. In the chapel, he added a Renaissance altarpiece from a church in Antwerp, and a fine set of Renaissance choir stalls.

He listed his residences as: 20 King Street, St. James'; Charborough Park, Dorset; Holnest House, Dorset; Ellerton Abbey, Yorkshire; and Olantigh Towers, Kent. When he died in 1887 his wealth was valued for probate at £139,338, but that figure did not include, "any mansions, farms or real estates held in trust, also it did not include Drax Hall Estates, Barbados, The West Indies". He bequeathed his paternal estates to his nephew and the Erle-Drax estates to his daughter who married Col. Francis Augustus Plunkett Burton.