Built in the 1650s by the Drax family, it is thought to have been constructed either by the brothers William Drax (1607-1691) and Colonel Sir James Drax (1609-1661), or by Sir James’ son, Colonel Henry Drax (1641-1682). Drax Hall is the oldest of only three Jacobean mansions remaining in the western hemisphere. Barbados is home to two of the three, the other being St. Nicholas Abbey while Virginia has Bacon's Castle. The Barbados Tourism Authority lists Drax Hall as one of the “Seven Wonders of Barbados,” but unlike St. Nicholas Abbey it is not a cultural centre and is not open to the public. It remains the property of the Drax family and certainly up until very recently they continued to make an annual visit to the still operational sugar plantation....
zoom_in 2 images 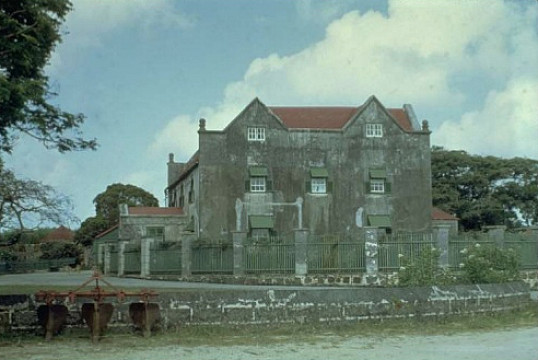 From 1642, Sir James Drax became the second man to cultivate sugar cane in the Caribbean, the first was Colonel James Holdip. It was Drax’s ingenuity that perfected a Dutch technique for processing sugar - a far more complex operation than processing cotton or tobacco - and so established the Drax family fortune. However, as pointed out by Matthew Parker, author of the excellent book The Sugar Barons, James Drax holds the distinct dishonour of being seemingly the first, or among the first, to convert from using indentured labour - where the worker works off a debt and then goes free - to enslaved labour - where the worker works for nothing, has no rights, and is never free.

The Drax family are the oldest of the sugar dynasties on Barbados. Sir James’ brother, William, took the art of sugar processing to Jamaica in 1669 and his brother-in-law, Colonel Christopher Codrington, took it to Antigua. Sir James' son, Henry, was said to be the wealthiest planter in 17th century Barbados and Henry’s first cousin, Christopher Codrington (1668-1710), founded the still extant Codrington College at St. John.

In his History of Barbados (2012), Sir Richard Schomburg wrote of Sir James Drax and his life at Drax Hall: "He appears to have lived in great style: Richard Ligon (1685-1662) tells us he fared like a prince, and killed now and then an ox, apparently a great piece of extravagance, as these animals were required for cultivating the soil... John Oldmixon (1673-1742) asserts that Colonel Drax, from a stock of £300, raised the greatest estate of any planter of his time, except Richard Walter (1636-1700), who was a merchant as well as a planter... Drax Hall forms the largest property, according to its superficial area, in the island; it contains 879-acres. The mansion-house is considered, with the one at St. Nicholas Abbey, the oldest in the island; it has not the cheerful aspect of the latter, and its appearance imparts a gloomy character to the whole landscape around."

The well-preserved coral-stone house that is Drax Hall is a fine example of classic Jacobean architecture. It has a steep red gable roof, coral-stone corner finials and casement gable windows. Its exterior is not as elegant as St. Nicholas Abbey, but it boasts spectacular original carvings in the grand three-story staircase and wide-arched doorway into the stair hall. Similarly to the Principal’s Lodge at Codrington College from the same era, Drax Hall has excellent stonemasonry detailing and balustrades on the upper landing.

In 1834, (two years before slavery was abolished), the Drax Hall estate had 189-slaves working a massive 879-acres. Between 1825 and 1834, the estate produced an average of 163-metric tons of sugar and 4,845-gallons of rum per year, which gave its proprietor a net profit of £3,591 a year. In today's terms, that would be a net profit of something in the region of £420,000 a year. When slavery was abolished in 1836, the proprietor, John Erle-Drax (1800-1887), received just over £4,293 in compensation for those 189-slaves, He was a great-great-grandson of Henry Drax and resident at Charborough House in Dorset. When two members of the American Anti-Slavery Society visited Drax Hall in 1837, the profits may have taken a dent, but otherwise it was business as usual:

"Drax Hall is the largest estate in the island – consisting of 800-acres of land. The number of apprentices is not in the same proportion; those belonging to the estate do not exceed 250 – many others are hired in crop season. A portion of the land is leased in small sections for cultivation – some to whites and some to blacks. The mansion at Drax Hall is an old massive building with turrets, gothic windows, oaken casements, high stories, and wide halls. We were told the building was an hundred and twenty years old".

Although now refined elsewhere, the plantation still harvests sugar and it is still owned by - though not home to - the Drax family. Since 1720, they have resided at Charborough House in Dorset which came into their possession through the marriage of Henry Drax, great-grandson of Sir James Drax. But, Drax Hall remains an important investment and the present owner of all the Drax family estates, Richard Drax (aka Richard Grosvenor Plunkett-Ernle-Erle-Drax, M.P.), invariably accompanied his father (who died in 2017) on his annual trips to inspect their Barbadian property. In 2010, Richard continued another long family tradition when he was elected to the British House of Commons.

Drax Hall today is worth an estimated £4.7 million and Richard Drax's total inherited wealth is estimated at £150-million. Up until 2008, it was still comprised of roughly 880-acres before some 200-acres was sold off for development. Some would like to see Richard Drax pay reparations. David Comissiong, Barbados' Ambassador to Caricom, hasn't been so direct but has said: “You can’t simply walk away from the scene of the crime. (The Drax family has) a responsibility now to make some effort to help repair the damage".

Whichever way you look at it, the Drax family owe a debt of gratitude to the slaves and the country that has given them nearly four centuries-worth of vast wealth and unbridled privilege. It is then a rather sad legacy that the only reason most people have ever heard of their distinctive name is not because of even just one endowment, but because of a villain in a James Bond movie. The exterior of the old plantation house is certainly worth seeing to gain an insight into Barbados’ rich heritage, but unlike the island's other Jacobean mansion, St. Nicholas Abbey, it is not a cultural centre, nor open to the public.

The Sugar Barons: Family, Corruption, Empire, and War in the West Indies By Matthew Parker

Sugar in the Blood: A Family's Story of Slavery and Empire By Andrea Stuart

Caribbean: A Novel By James A. Michener

Vaucluse By Donna Every

The Ninth Life of Louis Drax: A Novel By Liz Jensen