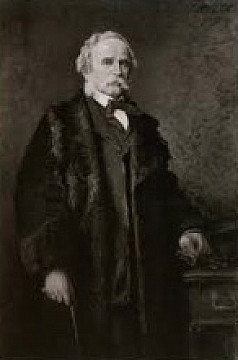 He followed his elder brothers - already successful in the textiles industry - to New York, becoming a stockbroker. His firm, Lockwood & Co., had the reputation of the highest integrity and he was appointed Treasurer of the New York Stock Exchange. Through a combination of personal charm, savvy railroad and shipping investments, and selling Union bonds in Europe during the Civil War, he became one of the country's first millionaires. He raised and financed Company F of the 17th Connecticut Volunteer Infantry during the war (known as "Lockwood's Guards"). He built an impressive collection of art and embraced the role of Patron of the Arts: at a cost of $25,000 he commissioned Bierstadt's "The Domes of the Yosemite" - the artists largest canvas - that hung in the octagonal rotunda at Elm Park, his mansion in Norwalk. He also footed most of the $150,000 bill that enabled the artist William Bradford to paint in the Arctic. In gratitude, Bradford dedicated the resulting book to him. In 1869, Lockwood was the victim of "Black Friday" on Wall Street and sold $10 million of railroad stock to stay afloat, but his beloved summer mansion was foreclosed shortly after his death.

Financiers Patrons of the Arts