Completed in 1868, for the brilliantly named LeGrand Lockwood (1820-1872) and his wife, Anna Louisa Benedict (1823-1882). This classic Victorian mansion contains 62 rooms and is viewed as the finest surviving work of its notable architect, Detlef Lienau (1818-1887), the man credited for introducing the French Second Empire style to America. Lockwood, a native of Norwalk who returned from New York a millionaire, succeeded in his ambitions to create one of the most opulent showpiece mansions of the early Gilded Age. On its completion, certainly in the northern states, the house he called Elm Park was rivalled only by Jay Cooke's Ogontz in Pennsylvania. Today, it is a popular house museum and venue, and the jewel in the crown of Norwalk....
zoom_in 20 images 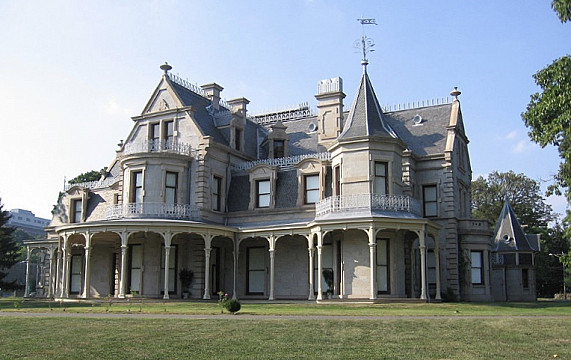 LeGrand Lockwood was "the son of an honest cobbler, of Norwalk" whose family had lived in the town since the 1640s. He followed his elder brothers - already successful in the textiles industry - to New York, becoming a stockbroker. His firm had the reputation of the highest integrity and he was appointed Treasurer of the New York Stock Exchange. Through a combination of personal charm, savvy railroad investments and selling Union bonds in Europe during the Civil War, he became one of the country's first millionaires.

In 1864, he purchased 30-acres in his native Norwalk on which to build a summer home to display his success. The house was positioned on an eminence overlooking Long Island Sound, enjoying "a view of wonderful beauty and grandeur". The architect was the  German-born, French-trained Detlef Lienau (1818-1887), a founding member of the American Institute of Architects, who in 1851 had built Lockwood's townhouse in New York - the first in the city with a mansard roof. Lienau's design was typically Victorian, being Gothic with elements of French Second Empire, the Chateauesque, and Italianate.
The house was laid out in the shape of a Greek cross and built with granite blocks 20 inches thick and dressed with ashlar. Stone masons (who earned $1 a day) and wood carvers (just 50 cents) came over on the ships from Italy that brought the rare woods and Florentine marble, then lived on site for the duration of the work. The gardens were landscaped by Frederick Law Olmsted (1822-1903) and his designs included carriage roads, wide lawns, a large pond and vegetable, fruit, and flower gardens. Outbuildings included a gate lodge, gardener's cottage, stables, carriage house and greenhouses.

The sumptuous interior was the work of the Herter Brothers, with Leon Marcotte and George Platt. The exquisite murals were painted by the well-known French artist Pierre-Victor Galland (1822-1892) who'd originally studied architecture under Henri Labrouste (1801-1875), just as Lienau had too, which may or may not have been a coincidence. The marble columns, frescoed and gilded walls and ceilings were all set off with the Lockwoods magnificent collection of art and the results of their shopping trip to Paris in the summer of 1867 during when they bought furniture, objets d'art, and Egyptian porphyry.

The 44,000 square foot mansion contains 62 rooms. At the center of the house is the exceptional octagonal rotunda that served as an art gallery. In pride of place hung Bierstadt's "Domes of the Yosemite," at 9.5 x 15 feet it is the artist's largest canvas and was commissioned by Lockwood in 1867 for $25,000. Another unusual feature is that the house has not one, but two billiard rooms, and a private theater in the attic. There are 19 bedrooms (for family, guests and servants), but extraordinarily for the time it also had 14 bathrooms and 12 water closets. Also unheard of was the burglar alarm that linked to every window and door. Construction costs and furnishings came to a cool $1.5 million.

In 1869, perhaps the most notorious of all the robber barons, Jay Gould (1836-1892), attempted to corner the gold market which resulted in "Black Friday" on Wall Street. Millions were swept off the Exchange within hours and among the many casualties of that day was LeGrand Lockwood. In a bid to stay afloat, he sold off $10 million of railroad stock but even then still had to mortgage his beloved summer house at Norwalk.

Only four years after the house he named Elm Park had been completed, Lockwood caught pneumonia and died at his Fifth Avenue mansion in February, 1872. In April, to meet the mortgage repayments, his widow, Anna, held an auction of their valuables. She sold off their art collection and the objets d'art they'd purchased just five years ago in Paris when it was impossible to imagine the position in which she now found herself.

In 1873, despite the auction, Mrs Lockwood was unable to keep up with the mortgage repayments and advertized the house for sale in the New York papers. There were no takers and in December, unable to make the final $90,000 repayment, the Lake Shore & Michigan Railroad (once Lockwoods, but now owned by Cornelius Vanderbilt) foreclosed.

The Mathews Family & their Servants

Mrs Lockwood had moved permanently to New York, living with her eldest son, LeGrand Lockwood Jr. The great mansion at Norwalk sat empty from 1873 to 1876, maintained only by the caretaker, Mr Hungerford, now indirectly in Vanderbilt's employ, who lived in the two-story gate lodge. In 1876, Mrs Lockwood moved to California with another son, Harry, and the house was sold for the mortgaged amount of $90,000 to Charles D. Mathews.

Charles Drelincourt Mathews (1821-1879) of New York was a wealthy provisions merchant. But, almost no sooner had he carried out the much-needed renovations that included buying back several of the original furnishings from Mrs Lockwood and those who attended her auction, he dropped dead. His funeral was held in the Music Room.

Part of the attraction of Elm Park for the Mathews family was its proximity to the Catholic church at Norwalk that meant a ready supply of domestic help. The church attracted Irish immigrants whose women sought employment in the big houses around - happy to take the higher wages than they'd get working in the mills. In 1880, the Mathews employed a permanent staff of 8 - all Irish, and all worshiped at St. Marys:

The extended Mathews family (including the Thompson and Martin families) continued to summer at Norwalk until 1938. When the eldest son, Charles T. Mathews, died in 1934, he left both the family mansion on 5th Avenue and the one in Norwalk to his kind and charitable sister, Florence. She held on to the valuable townhouse, but moved full time to Norwalk, keeping the house there just as her father had left it. She died just four years later, leaving it to her sister's Lillie's two daughters, Mrs Florence Courtnay and Mrs Edith Mossman (1878-1959). They leased it to the city for two years before selling.

In 1941 the city bought the mansion for $170,000. The grounds were transformed into a public park while the house was used for office space and storage. However, by 1963 the city were determined to demolish it to build a new City Hall and it was only saved by an equally determined group of preservationists. It was first opened to the public as a house museum in 1967 and in 2007 it received a $6 million renovation. It remains both a museum and events venue, and has featured in several movies including House of Dark Shadows (1970), - predominantly filmed at Lyndhurst - and more recently The Stepford Wives (2004).

The Domestic Architecture of Detlef Lienau, a Conservative Victorian By Ellen Weill Kramer

Genius of Place: The Life of Frederick Law Olmsted By Justin Martin

Building the Frick Collection: An introduction to the House and Its Collections By Colin B. Bailey

Albert Bierstadt: Witness to a Changing West By Peter H. Hassrick. Foreword by Bruce B. Eldredge