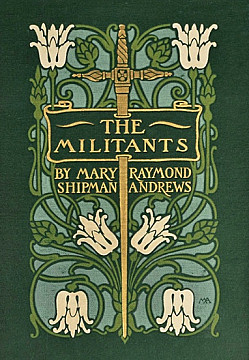 She was born in New York City to a notably artistic family - her father was instrumental in establishing the Met Museum. She became an illustrator and working in the art-nouveau style she designed more than 270-book covers and book bindings, about half of which were for Scribner's. She sometimes collaborated with her sister, Helen, the famous stained glass artist. Margaret has been called, "the most productive and accomplished American book designer of the 1890s and early 1900s" and her work is often compared to that of her contemporary, Alice Cordelia Morse.

She was a passionate botanist and often worked wildflowers into her illustrations. After travelling and camping through North America (becoming one of the first women to reach the bottom of the Grand Canyon) she discovered several new species of flowers which she published in her Field Book of Western Wild Flowers (1915). After 1913, when dust jackets came into fashion, she turned to writing books rather than illustrating them, but nonetheless her style was still so popular that publishers hired other artists to imitate her. After 1895, the books she illustrated can be identified by the use of her monogram, "MA". Towards the end of her life, she wrote three critically acclaimed mystery novels, two biographies, and her father's memoirs. She died in New York City, unmarried.