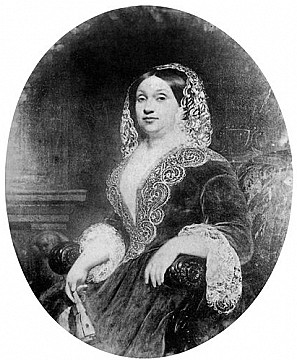 She was born in New York, the eldest daughter of the second President of the Chemical Bank of New York. She reigned as one of the leading society hostesses in New York for over 50-years. She was married in 1818 to Isaac Jones, 3rd President of the Chemical Bank, and built a new home at 122 Chambers Street which became the first house in the city to contain both gas and a bathtub. Her home at 734 Broadway sat between those of her sisters and once a year they were able to open their Drawing Rooms onto one another thereby creating what was then the largest ballroom in the city. After inheriting a large swathe of land at Fifth Avenue and 57th, in 1869 she erected the Mary Mason Jones Mansion, "built by plans of her own, made by an architect from ideas she derived from the Chateau de Fontainebleu". In 1883, ignoring the advice of her friends, she also built the Mason Apartment Houses on East 58th Street which turned out to be a better investment than her white chateau. A notable feature of her apartment houses was an octagonal-shaped room that stood at the center of each one, designed by herself.

She was the great aunt of Edith Wharton and is famously portrayed as Mrs Manson Mingott in Wharton's famous book, The Age of Innocence. She was the mother of three children: (1) Mary, Countess de Trobriand (2) Mason Renshaw Jones who married Lydia Beekman Haight (3) Emily, Mrs Burnett Stears, mother of the Countess de Maleissye.