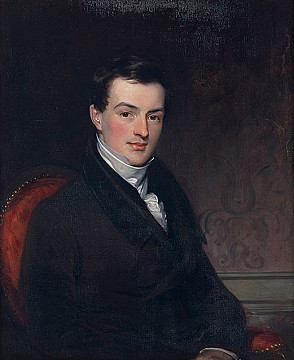 He was born at his parents home on Union Street in Fayetteville, North Carolina, but after being orphaned at age eight he grew up with relatives nearby. After graduating from the University of North Carolina in 1818, he took a five month tour of the northern states and Canada, igniting his passion for architecture. In 1820, he travelled to England, Scotland and France. While in London, he received a $300,000 inheritance from the estate of his unmarried uncle, Samuel Donaldson (1748-1813), of Bush Lane. Returning to Fayetteville, he briefly lived at the old family home on Union Street, where he and his siblings, "lived splendidly... beyond any other family in the place". It was also at this time that he undertook his first architectural project, building the Lafayette Hotel. In 1828, he married Susan Gaston (with whom he would have five children) and moved with her, his brother James and two of his sisters to New York City. He purchased the townhouse of the late Archibald Gracie (1755-1829) at 15 State Street and became a patron of young artists and writers of the Romantic Movement. Here he became friends with Alexander Jackson Davis who remodelled his Manhattan home and the estate he bought in 1835 on the Hudson Valley, Blithewood. He was the father of five children.

Financiers Patrons of the Arts