Rebuilt from 1836, for Robert Donaldson Jr. (1800-1872) and his wife Susan Jane Gaston (1808-1866). Dating from 1795, Blithewood was originally a Federal-style manor called "Mill Hill". It was then the country home of John Armstrong whose sister-in-law, Mrs Janet (Livingston) Montgomery built Montgomery Place on the estate immediately to the south of his own. In 1836, the Donaldsons employed Alexander Jackson Davis to redesign the house and Andrew Jackson Downing to landscape the gardens, at which time they christened it "Blithewood". The next owners, the Bards, renamed it "Annandale" from which the village takes its name. After they left, it sat empty for thirty years and fell into a state beyond repair. When Captain Zabriskie bought it in 1899, he was unable to salvage it and built the magnificent Beaux-Arts mansion that stands in its place today, also named Blithewood, which is now Bard College's Levy Economics Institute....
zoom_in 9 images 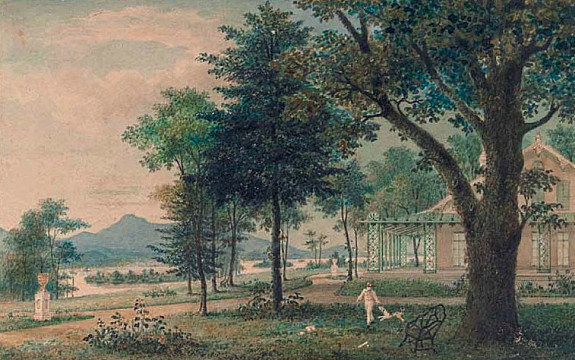 In 1680, Colonel Pieter Schuyler (1657-1724), 22nd Colonial Governor of New York and the first Mayor of Albany, purchased the land along the river at Cruger’s Island, including most of Red Hook. In 1720, he sold the stretch of land directly along the riverfront of his property to Barent Van Benthuysen (1664-1723). His slaves cleared a plot of this land along the road to Cruger’s Island to make way for his new home, "Van Benthuysen’s Castle".

Over the years, the Van Benthuysen estate was gradually partitioned and sold off or lost in mortgage foreclosures by succeeding members of the family. In 1795, Barent Van Benthuysen (1739-1810) sold 200-acres of his ancestral riverfront property to Senator John Armstrong Jr. (1758-1843) and his wife Alida Livingston (1761–1822). On part of this land, the Armstrongs converted an existing barn into a 2-story villa of 12-rooms and they planted Eastern white pine trees along the driveway, several of which still survive today on Blithewood Avenue. At the time, Armstrong wrote of the estate he named "Mill Hill" to the agent of Rufus King who was looking to purchase a property in the vicinity:

The grounds are beautiful, the house is new built of the best materials, & in the best manner. The dining room & the drawing room, which communicate are 19 x 24' each, there is a small library, pantry, & hall, on the same floor and on the second floor four handsome bedrooms.

Just six years later in 1801, John Armstrong stepped in to replace John Laurance as the U.S. Senator from New York and that year disposed of Mill Hill to Mrs Mary (Johnston) Allen (b.1754), widow of John Allen, of Philadelphia. Mrs Allen was the sister of Judge John Johnston of Bellefield, and they were two of the children of proud Scots-American David Johnston, President of the Saint Andrew's Society of New York. Having no doubt been long imbued with tales of her Scottish ancestry, it was then no surprise that Mrs Allen renamed Mill Hill "Annandale," both for her father's estate in nearby Linlithgow and the ancestral seat in Scotland of the chiefs of Clan Johnstone, the Earls of Annandale.

The Stevens and Crugers

After just nine years (1810), the Allens sold Annandale to John Cox Stevens (1785-1857) whose uncle by marriage, Chancellor Robert R. Livingston was the elder brother of Mrs Alida Armstrong. Stevens' wife, Maria, was also a Livingston, the niece of Walter Livingston of Teviotdale. John Cox Stevens was a wealthy gentleman of leisure from Hoboken in New Jersey with a passion for yachting and thoroughbred racing. He was the first Commodore of the New York Yacht Club, President of The Jockey Club, and is also credited for introducing cricket to the United States. At Mill Hill, he built a stable complex and a racecourse, the upper curve of which is the point on which the chapel now stands.

In 1833, the Stevens' sold the estate to John Church Cruger (1807-1879) who also owned nearby Cruger Island where he lived with his wife Euphemia White Van Rensselaer (1816-1888). Two years later, Cruger sold the 95-acre portion of the estate on the bluff that fronted the river to Robert Donaldson (1800-1872) and his wife Susan Jane Gaston (1807-1866), for $19,000. It was the Donaldsons who developed the property that became known as one of the country's finest examples of landscape and architectural design.

Robert Donaldson (1800-1872), orphaned at the age of eight, was born and brought up in Fayetteville, North Carolina. By 1820, the already well-travelled and erudite young man had come into fortunes via both his late father and an uncle in London who left him an additional $300,000. In 1828, he married Susan Gaston, also from North Carolina, and they moved to New York City where they lived at 15 State Street, the former townhouse of Archibald Gracie. The Donaldsons established themselves as patrons of young artists and writers of the Romantic Movement; and, it was here that Robert became friends with Alexander Jackson Davis and first commissioned him to remodel his home in Manhattan.

In 1834, Donaldson had purchased a partially wooded estate elsewhere. It was devoid of any buildings and so he commissioned Davis to design a country home. The result was a mansion in what Davis called the "English Collegiate style," but this was scrapped when Donaldson sold the land in favor of buying the Mill Hill estate the following year.

In 1835, Mrs Donaldson wrote to her father (Judge William Gaston) back in Carolina: "Mr. D. has bought a beautiful country seat on the river & our present plan is to pass our summers there & to have a house for the winter in Carolina... I shall certainly see you every winter & my husband’s long indulged wish for the country will be gratified.”

Donaldson had initially purchased the Mill Hill estate to pursue his interests in farming and scientific agriculture. But, both he and his wife were immediately smitten by its natural beauty and this led Mrs Donaldson to rename it "Blithewood": "Blythe" meaning "Joyous" and/or "Cheerful" in Old English. Davis was employed to renovate and beautify the old Armstrong house in a style that became known as, "Hudson River Bracketed" while Andrew Jackson Downing laid out terraced gardens with "wild and natural" walks interspersed with rustic seats offering spectacular views of the surrounding countryside.

The roof of the villa was extended from a wide low-pitched gable with eave brackets to an ornamental, wide-covered verandah that wrapped around the house on three sides. From the inside, an oval window that gave a view over the mountain scenery beyond created a "living picture". The outbuildings at Blithewood included an Egyptian Revival tool-house, a grape house, a rustic temple, an ornamental springhouse and two gatehouses.

Downing featured Blithewood in his book, Landscape Gardening & Rural Architecture, published in 1841. He describes the situation of the villa and its surrounding countryside:

Blithewood is one of the most charming villa residences in the Union. The natural scenery here, is nowhere surpassed in its enchanting union of softness and dignity - the river being four miles wide, its placid bosom broken only by islands and gleaming sails, and the horizon grandly closing in with the tall blue summits of the distant Kaatskills. The smiling, gently varied lawn is studded with groups and masses of fine forest and ornamental trees... A fine, bold stream fringed with rocky banks and dashing over rocky cascades, thirty or forty feet in height and falling altogether an hundred feet in half a mile... In short, we can recall no place of moderate extent where nature and tasteful art are so harmoniously combined to express grace and elegance.

The Donaldsons threw themselves wholeheartedly into their new project, prompting Mrs Donaldson to write in 1836: "Mr. D seems perfectly in his element & wonders how he existed so long in a City". He worked closely alongside both Davis and Downing winning the respect of both. When Downing published Cottage Residences in 1842 he dedicated the book to "Donaldson, the Arbiter Elegantiarum," ie., the supreme arbiter of taste.

The first gatehouse was built in the "Rustic Cottage Style" and became better known as "The Gardener's Lodge". Distinguished by its high-peaked central gables, it was erected in 1836 and became, "the prototype for Gothic-style cottage architecture in the United States". The 7-room, 2-story lodge is usually credited to Davis, but Davis credited the design to Donaldson. The second gatehouse is hexagonal with brackets and was built by Davis in 1841. Though altered, it is the only building that remains on the estate today from Donaldson's era. The Gardener's Cottage was demolished in 1900 to make way for a stable and coach-house on Captain Zabriskie's new Blithewood.

From 1841, the Donaldsons took the decision to live year-round at Blithewood. In 1845, he added an art gallery to the house within a new wing with a half-octagonal end that overlooked the river. This room housed Donaldson's most prized pieces: "Gypsying Party" by Robert Leslie; and, a copy made for Donaldson in 1831 of Raphael's fresco, "The School of Athens" by the painter-turned-inventor, Samuel F.B. Morse. There were also several Dutch landscape and Italian paintings, as well as his collection of portraits.

Back to "Annandale" and the Bards of Bard College

In 1852, the Donaldsons moved the few miles to Edgewater and sold Blithewood (by then increased to 130-acres) for $63,000 to John Bard (1819-1899) and his first wife, Margaret Taylor Johnston. Mrs Bard immediately renamed the estate "Annandale" as it had been named by Mary (née Johnston) Allen back in 1801. Neither of the two women were related to one another; neither were Scottish by birth; and, despite claims, neither had concrete evidence of descent from the chiefs of Clan Johnstone, the Earls of Annandale. However, interestingly, both were daughters of past Presidents of the Saint Andrew's Society of New York and would therefore have been well-imbued with most likely romantic tales of their past and the traditions of Scotland. There is a distinct similarity between the undulating landscapes of the strath ("river valley") of Annandale and that of the Hudson, but it is unlikely that either of the Ladys of Annandale had set eyes upon its Scottish namesake.

Aside from changing the name, the Bards left the house essentially as they found it, but that is not to say that they did not make changes to the estate. Mr and Mrs Bard were devout Christians and devoted to the cause of education. In 1854, they built "Bard Hall" on the estate to serve as a Sunday school for the local community. Two years later (1856), they paid for the construction of the Chapel of Holy Innocents; and, in 1860, they gave over 18-acres of Annandale to found St. Stephen's College which became Bard College.
Blithewood Once More, and the Zabriskie Mansion

In 1868, on the tragic early death of their only son, William Bard, the Bards and their three daughters left America and moved to Europe. Blithewood was left empty and by the time it had gone to foreclosure some thirty years later, the estate was a shadow of its former self. In 1897, the property was purchased by St. Stephen's College for $38,444, before being sold two years later to Captain Andrew Christian Zabriskie (1853-1916) and his wife Frances Hunter. The timber house was then beyond repair and they replaced it with the Beaux-Arts mansion that they named Blithewood. Its architect, Francis Hoppin, also designed the gardens and followed many of the original lines laid out by Andrew Jackson Downing.

Gardens of the Hudson Valley By Susan Daley & Steve Gross

Life Along The Hudson: The Historic Country Estates of the Livingston Family By Pieter Estersohn

The Arrangement: A Novel By Sarah Dunn