Explorer, Naturalist & Director of the American Museum of Natural History 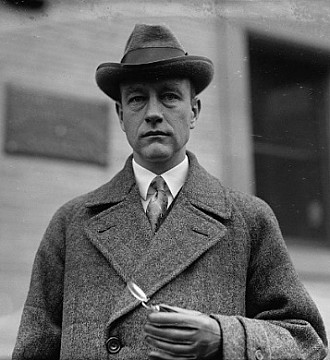 He was born at Beloit, Wisconsin. He taught himself taxidermy and used the profits to pay for his education at Beloit College. Having been told there were no openings at the American Museum of Natural History in New York City, he took a job as a janitor in the taxidermy department and began collecting specimens for the museum. Once again, he self-funded his Masters degree in mammalogy from Columbia University and became a member of The Explorers Club in 1908. The following year he sailed to the East Indies collecting snakes and lizards and observing marine life. In 1913, he sailed to the Arctic and married his well-connected first wife, Yvette Borup, in 1914.

From 1916, he and Yvette led the American Museum's Asiatic Zoological Expedition through much of western and southern Yunnan, as well as other provinces of China and he published Camps and Trails in China as a record of their experiences. In 1920, he travelled to Mongolia and discovered the fossil of a massive hornless rhinoceros which was sent back to the museum and duly named Andrewsarchus from him. Along with Henry Fairfield Osborn, he was an advocate of the theory that humanity's origins lay in Asia and between 1922 and 1928 he led several expeditions in Asia. On one such expedition in 1923, he found the first nests full of dinosaur eggs ever discovered. As a backdrop to this period in his life and these expeditions he, "braved raging sandstorms, murderous bandits, political intrigue, civil war, and conflicts between the United States and China".

He returned to the States in 1930 and was appointed President of The Explorers Club from 1931 to 1934 and afterwards became Director of the Natural History Museum. He divorced his first wife in 1930 and in 1935 married his second wife, Billie Christmas. They lived in an apartment in the old Joseph Pulitzer Mansion. and initially summered at  "Pondwood" in North Colebrook, Connecticut, before retiring there in 1942 where he wrote most of his books. He was survived by two sons from his first marriage. He is often called the real-life Indiana Jones and his whip is on display at The Explorer's Club.

Quest of the Snow Leopard By Roy Chapman Andrews

Indiana Jones and the Temple of Doom By (Starring) Harrison Ford