Completed in 1903, for the newspaper publisher Joseph Pulitzer (1847-1911) and his beautiful wife Kate Davis (1858-1927). It was designed by the celebrated architect Stanford White who modelled it on two of Venice's most sumptuous 17th-century palazzos, Ca' Rezzonico and Ca' Pesaro. Although Pulitzer's request had been for an almost puritanical interior, his younger fashion-conscious wife won him over and on completion the mansion contained a 48-foot Drawing Room/Ballroom with 19-foot floor-to-ceiling windows, an indoor swimming pool, and a squash court. Sadly, by the time he built his new home, life was getting increasingly harder for Pulitzer to enjoy: he was totally blind and suffering from an acute sensitivity to noise that made sleep almost impossible. Despite all its size and splendor, it was only a family home for just eight years and since then it has twice evaded the wrecking ball and is now divided into 17-highly prized apartments one of which was the home of the real-life Indiana Jones....
zoom_in 7 images 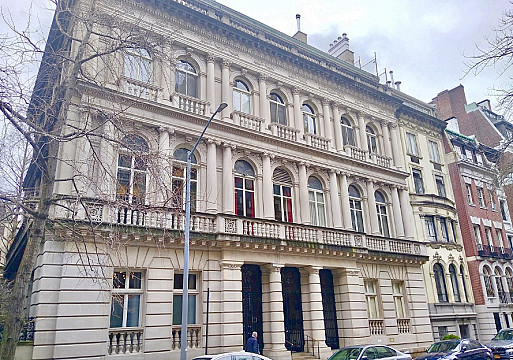 Explorer, Naturalist & Director of the American Museum of Natural History

Through nothing other than sheer determination, energy and ability, Joseph Pulitzer's life was one of the very few true rags-to-riches stories. A veteran of the Civil War, homeless, and having sold his last possession (a white handkerchief) for 75-cents, he got himself to St. Louis where after a string of menial jobs he got his break as a reporter for a German-language paper. From then, he didn't look back. In New York, his newspaper, the World, became the most widely read in the country and as a U.S. Congressman he led the campaign to keep the Statue of Liberty in New York. Today, his name is immortalized by the prizes given out each year in journalism, literature, poetry, history, music and drama.

In January, 1900, tragedy struck the Pulitzer household when their double townhouse at 10 & 12 East 55th Street - renovated by McKim, Mead & White - burned down. Aside from the house and all its valuable contents (his prized collection of paintings by Millet and one of the city's two or three finest libraries), more tragically they also lost two of their 17-servants, Mrs Pulitzer's housekeeper/companion (Mrs Morgan Jellett) and the children's governess, Elizabeth Montgomery. As a stopgap, they leased the Henry T. Sloane House at 9 East 72nd Street before Pulitzer purchased four plots of land to the north of 73rd Street on which to build their new home that would sit on a footprint of 76-by-100-feet.

Not Exactly "An American Home... Not For Show or Entertainment"

To assist his blind client, Stanford White made a miniature model of the house that he proposed building, allowing Pulitzer to handle and picture it. As for its interior, Pulitzer famously asked for, "no ballroom, no music room, or picture gallery under any disguise (and) no French rooms, designed or decorated to require French furniture... I want an American home for comfort and use and not for show or entertainment". His wife however had different ideas and wasted no time ensuring quite the opposite happened!

The house was entered via a magnificent set of wrought iron gates and the stairs in the great hall are said to have been very loosely based on the same at the Palais Garnier in Paris. On the second floor, entered through a pair 20-foot marble columns is the 48-by-24-foot Drawing Room/Ballroom. The ceilings in this room (since divided into two rooms) reach up 19-feet in height and the row of arched floor-to-ceiling windows topped by golden cherubs that overlook the street stood opposite five equally elegant French doors.

Of the initial requests made to White, he was only surprised by Pulitzer's lack of interest in a music room as Pulitzer was well-known for his love of music. But, as it transpired, in addition to the music room, a beautiful Aeolian Organ with an electro-pneumatic action was installed in the main hall at the top of the first flight of stairs. Its beautiful housing can still be seen but as for the organ itself, that disappeared some years ago.

Aside from his request for simplicity, Pulitzer required the house to be fireproof and his sleeping quarters made soundproof in consequence of his acute sensitivity to noise. White designed his rooms (as well as the 40-square foot "Tower of Silence" at Pulitzer's summer home, Chatwold) in conjunction with Harvard's expert on acoustics, but despite his repeated best efforts, Pulitzer became the proverbial 'Princess-and-the-Pea' so much so that White eventually accused him of purposefully trying to drive him insane!

White was subesquently fired and Pulitzer leased Moray Lodge in London in an attempt to find some peace while another firm built a new set of rooms towards the back of the house. But, after just one restless night in his new rooms Pulitzer re-hired White. This time White was better able to identify the weak point in his bedroom and thousands of silk threads were now stretched across the flue opening of the chimney, finally solving the problem and with it creating almost undoubtedly the quietest corner of Manhattan!

The house was finished in 1903; Pulitzer's rooms were finally soundproof by 1904; but, in 1911 Pulitzer was dead and his family did not linger in the mansion for one moment longer than they had to. Incredibly, it sat empty and on the market for nearly 20-years and only saw a brief flurry of life in 1928 when it was opened to the public for the purpose of auctioning off much the furnishings that after two days raised $69,428.

In 1930, Pulitzer's sons finally managed to drop the yolk from their necks, getting rid of the mansion to a group of investors who intended to replace it with an apartment block. The Great Depression derailed those plans and instead the consortium leased it for 20-years to another developer, Henry Mandel, who employed James Casale to maintain the limestone facade but divide the interior into apartments. Just as Mandel's enthusiasm for the project waned, Pulitzer's sons interest were reinvigorated. On retaking possession, in 1937 they approved Casale's plan and the interior was divided into 17-apartments and then promptly sold to the William Waldorf Astor Estate to add to their investment portfolio.

In 1952, it changed hands again and for a second time found itself staring the wrecking ball in the face as The New York Times announced  the new owners plans for, “improvement of the site with a modern apartment building”. At the last minute, public nostalgia for Stanford White's slice of Renaissance Venice in Manhattan won the day and it finally became what it remains today: 17-highly-prized cooperative apartments.

Life Since & "The Raider (Resident) of the (Nearly) Lost Ark"

To all outward appearances, the mansion remains entirely unchanged and many interior features also remain even if altered, eg. the 48-by-24-foot Drawing Room/Ballroom which although now divided into two separate rooms, still retains its original features; and, the former breakfast room is now a library in the same apartment that contains Pulitzer's soundproof rooms. Perhaps most notable among its many residents since subdivision is the said-to-be real-life Indiana Jones (Roy Chapman Andrews) who lived here with his second wife, Billie Christmas, and whose whip is now owned by The Explorers Club.

Pulitzer: A Life in Politics, Print, and Power By James McGrath Morris

Stanford White: Decorator in Opulence and Dealer in Antiquities By Wayne Craven

Who was Joseph Pulitzer? A Novel By Terrence Crimmins

American Eve: Evelyn Nesbit, Stanford White, the Birth of the "It" Girl and the Crime of the Century By Paula Uruburu

Trust Me, I'm Lying: Confessions of a Media Manipulator By Ryan Holiday