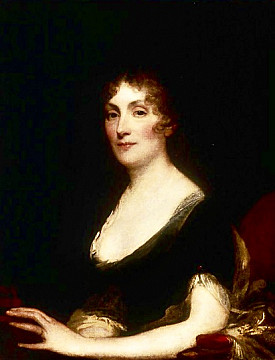 She was born in Boston to two of the country's wealthiest and most politcially important families. She was privately tutored as would have been expected, but she received a far broader education than almost any woman might have then hoped for, even studying architecture. She was a voracious reader and first started writing poetry as a child. As an adult, aside from poetry, she published her views on, "freedom, the new nation, women’s roles in American society, the relations among races and classes, and her own painful emotions from a troubled marriage and family tragedies".

To a significant extent, her position in life had been afforded to her through the Apthorp family's role in the slave trade, notably that played by her grandfather, Charles Apthorp, "a venerable slave importer and one of the richest men in Boston". Today, she is perhaps best known for her poem The African Chief which pays homage to a slave killed in the slave uprising at St. Domingo in 1791. By way of an introduction to the poem she wrote:

"Let the arrogant be reminded, that accident, not merit, has formed the difference in birth, in station, and in fortune; that the menial may possibly have feelings of body, and sensations of mind, similar to those of his superior; be as conscious of kindness, as inflicted by injury, as indignant at insult, and as exasperated by outrage, even as the most prosperous... Amid the murders of St. Domingo, the only merciful were those slaves upon whose bondage mercy had been bestowed. If thus, the most degraded of God's creatures seem alive to kindness, & are susceptible of gratitude, surely the more civilized, & better instructed, will not when weighed in the balance of moral feeling always be found wanting

In 1781, Sarah married Perez Morton and between 1782 and 1787 they had five children. When Sarah's younger sister, Fanny, came to live with them she was either seduced by or fell in love with Sarah's husband and gave birth to his child in 1787 or 1788. Her father, "demanded a confrontation with Perez, which Fanny begged him not to do. She argued it would cause a scandal and disgrace the family." But the secret did not remain a secret for long and once outed, Fanny took her own life. What is supposed to be her suicide note proclaiming her "guilty innocence," was then published in the local newspapers.

Divorce then not being an option, Sarah remained with her husband but no children were born to them after this incident and fifteen years later she had an affair with U.S. Founding Father, Gouverneur Morris. As a writer, Robert Treat Paine Jr. lauded her as the "American Sappho". After she died, The Power of Sympathy - published anonymously in 1789 and widely considered to be America's first novel - was for a long time attributed to her, but it was in fact written by her uncle, William Hill Brown, telling the story of Fanny's tragedy. Sarah's husband had tried but failed to suppress its publication.

My Mind and Its Thoughts, in Sketches, Fragments, and Essays By Sarah Wentworth Morton

Amazing Grace: An Anthology of Poems About Slavery, 1660–1810 By James G. Basker

The Power of Sympathy By William Hill Brown

Gentleman Revolutionary: Gouverneur Morris, the Rake Who Wrote the Constitution By Richard Brookhiser