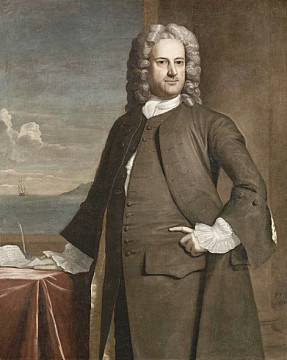 He was born at Bishopsgate, London, and was educated at Eton. He came to Boston with his parents and succeeded his father as, "Paymaster and Commissary under the British Government of the Land and Naval Forces quartered in Boston". He was a close business partner of Thomas Hancock and they supplied the ships to the British army to remove the Acadians (French-Canadian settlers) from Nova Scotia and the Maritimes. Drawing on his existing connections, Charles imported luxury goods of all descriptions into Boston, from the finest foods and wines to cannons, entire ships, and of course slaves, which he bought in 'parcels' to be sold. In 1792, his grand-daughter, Sarah Wentworth (Apthorp) Morton, published a poem entitled The African Chief in homage to a slave killed during the uprising at St. Domingo.

In 1726, Charles married Grizzell Eastwick, grand-daughter of Sir John Lloyd 1st Bt., who helped convey King Charles II to France. They lived between a mansion on Brattle Street and a country estate at Quincy. When Charles died he was reckoned to be the richest man in Boston, leaving a fortune of £150,000. He is buried at King's Chapel. His widow moved to a house off Brattle Square described in 1798: "Madam Apthorp's heirs, owners... brick dwelling; fronting east on Brattle Square; North on Widow Turell; South on Isaac Townsend... Land 3,170 square feet; House, 1,080 square feet; 2 stories; 27 windows; Value $4,500". Charles and Grizzell had 18-children, eleven survived to adulthood and married:

(1) Charles Ward Apthorp built the Apthorp Mansion at Bloomingdale, New York, and married Mary McEvers (2) Grizzell, married Barlow Trecothick, M.P., Lord Mayor of London (3) John Apthorp, married Alicia, sister of Sir Horatio Mann, and after her death, Hannah Greenleaf (4) James Apthorp, married Sarah Wentworth, whose first cousin, uncle and grandfather were all Governors of New Hampshire. They were the parents of "the American Sappho" Sarah Wentworth Morton (5) Rev. East Apthorp, Founder of Christ Church, Cambridge, where he built the Apthorp House. He married Elizabeth Hutchinson, a niece and granddaughter of two Governors of Massachusetts (6) Susan, married Thomas Bulfinch and they were the parents of "America's first native-born architect" Charles Bulfinch (7) Ann, married Nathaniel Wheelwright whose bankruptcy was "like an earthquake" to Boston (8) Elizabeth, married James McEvers and then her sister Rebecca's widow Robert Bayard, both of New York (9) Thomas Apthorp was a Loyalist and left America in 1780, settling in England. He was married twice (10) Rebecca, married Robert Bayard (11) William Apthorp, married Mary Thompson.