Completed in 1869, for Alexander Turney Stewart (1803-1876) and his wife Cornelia Mitchell Clinch (1802-1886). Theirs was the first of the grand mansions to be built on this corner of Fifth Avenue, followed by the likes of the Whitney Mansion. In contrast to the brownstones that then lined the street, Stewart's mansion was faced with marble and was one of the most sumptuous of Manhattan's early Gilded Age mansions. It was designed by John Kellum (1809-1871), the same man who built Stewart's gigantic store at 280 Broadway, nicknamed the "Marble Palace". After Stewart's death it was leased to the Manhattan Club before they traded places with the University Club (housed at the Jerome Mansion). It was unceremoniously demolished in 1901....
zoom_in 12 images 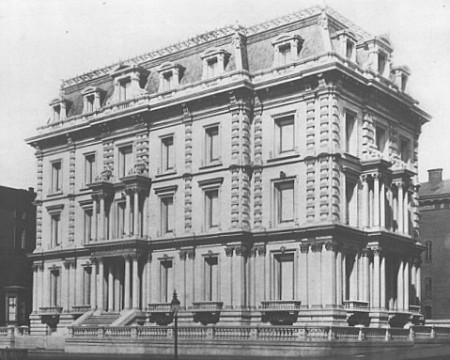 Stewart was a native of Lisburn, Co. Antrim in Northern Ireland, then well-known as a center for the global linen industry. He came to New York trading in dry goods (notably Irish linen and lace) before becoming a seminal retailer: He was said to have been the first store-owner to have put price tags on his goods rather than waste time with bartering; and, he was also said to have been the innovator of the "Sale" by advertizing discounted prices on merchandise he needed to shift. By 1848, he had 12 branches across the world and had earned himself the sobriquet, "The Merchant Prince of America".

"Perhaps the handsomest and most costly private residence in the country"

In 1864, Stewart purchased the Samuel P. Townsend Mansion, razed it, and built his new home. It cost a staggering $2 million and Frank Leslie considered that, "Mr. Stewart's marble palace, built on the site of the large structure formerly the residence of Dr. Townsend, is perhaps the handsomest and most costly private residence in the country."

Appleton said, "the interior of the Stewart mansion, at Fifth Avenue and thirty-fourth Street, is palatial. Many European palaces are less so." It stood three-stories high with a mansard roof. A mezzanine floor at cornice height was used for storage. It was separated from the sidewalks by a "moat-like" light well that lit the service areas in the basement. The interior was more akin to a museum, filled with treasures valued at $600,000 plus. Stewart had learnt to appreciate fine art from his cultured grandfather, John Turney (d.1815), in whose household he was brought up back in Northern Ireland.

The drawing room ran the full length of the house's Fifth Avenue frontage with furniture of gilded whitewood covered with pale yellow satin. But, perhaps most impressive were the ceilings and frescoed panels in the breakfast room, art gallery and dining room. These were the work of Italian artist Mario Brigaldi (1806-1893), the same man who decorated Brazil's Petrópolis Imperial Palace. Brigaldi reputedly spent a year in the house and aside from those mentioned, he put his hand to at least a small part of every room.

Stewart died in 1886 and his widow leased the mansion to the Manhattan Club. It continued as their clubhouse until 1899, when they swapped mansions with the University Club and moved into the Jerome Mansion. It was home to the University Club for just two years before the marble masterpiece was unceremoniously demolished in 1901 under the guise of "progression". It was replaced by the Knickerbocker Trust Company Building.

Then She Was Gone: A Novel By Lisa Jewell