Completed in 1865, for Leonard Jerome (1817-1891), "The King of Wall Street" and the grandfather of British Prime Minister Sir Winston Churchill. Situated on the corner of 26th & Madison Streets, the mansion was as flamboyant as Jerome's character and at just one party held here his guests consumed over 1,000 bottles of wine over a 10-course dinner! It was later home to two different clubs. In 1869, a meeting that established The Metropolitan Museum of Art was held here and when it became the Manhattan Club, the world-famous cocktail that bears the club's name was first mixed here. In 1968, the City was unable to find a buyer for the old mansion and it was pulled down. Today, the brown New York Merchandise Mart skyscraper stands in its place...
zoom_in 7 images 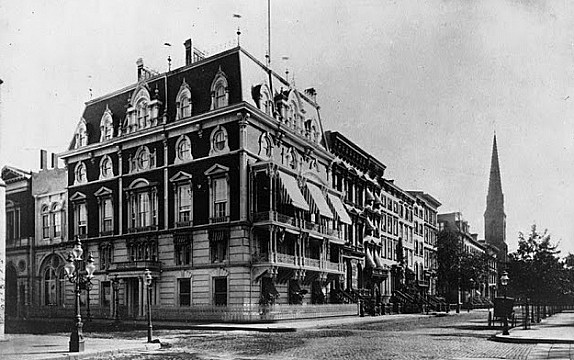 Leonard Jerome of New York "The King of Wall Street"

Jerome's five-story red-brick and marble mansion was as flamboyant as his character: He was known for "fine racehorses, costly carriages, tempestuous love affairs, and splendid parties". The stables were carpeted, and panelled in walnut; parties saw champagne and cognac flowing from the fountains in the white and gold Louis XIV ballroom; perfumes from Paris were infused into every room on a regular basis; and, it even contained its own 600-seat private theater - perhaps unsurprising for a man with a penchant for actresses!

Standing Out from the Crowd

Through savvy investments in railroads and newspapers, Jerome had become one of the wealthiest men in New York by the age 40. In 1859, having chosen a plot of land with a "splendid" view over Central Park, he commissioned Thomas R. Jackson to build him a mansion that would stand out from all the others that then lined Madison Square Park. Jackson was the relatively unknown head draftsman to Richard Upjohn, founding President of the American Institute of Architects, and this was perhaps his only domestic commission.

At a cost of $200,000, Jackson delivered an ornate six-story mansion with mansard roof and carved stone balconies and a dining room that could seat 100 guests. The stables were separate to the house, but Jerome later filled in the gap by installing the previously mentioned private theater. Here the Jeromes held court: One party cost Jerome $30,000 during which his guests consumed over 1,000 bottles of wine over a 10-course dinner!

Though the last works to the house (fitting the theater) were not completed until 1865, works had started in 1859 and it may have been here that James Van Buren (1810-1866) reputedly lost Lindenwald to Jerome over a game of cards in 1864. The Jeromes only lived here until 1867 before moving to Brooklyn. Their short residency is explained by a contemporary account that Jerome had in fact built the mansion for the American Jockey Club, of which he was vice-president.

From 1868 to 1881, Jerome leased the mansion to the Union League Club for $18,000 per annum - making this yet another savvy investment for the King of Wall Street. No changes were made to the exterior, while on the interior "no expense has been spared in furniture and appropriate ornamentation". An account of the time described the layout:

On the first floor are the visitors' reception-room, the reading room, the art gallery, the billiard room, the cloak and hat room, the bar and the ten-pin alleys. On the second floor is the theatre, which it is proposed will be used for the more important meetings of the Club and hired out for first-class lectures, reading, &c, &c. On this floor also have been constructed a number of private dining-rooms for the Club members. On the third floor is the main parlor, looking on Madison Avenue, and from the windows of which the fine balcony running along that side of the building is reached... Adjoining the parlor are the library, the trophy room and a fine, spacious saloon by which the theatre is reached. On the three remaining floors are bedrooms, elegantly furnished, intended for the occasional accommodation of members and for the purposes of hospitality.

In 1875, the young and talented architect J. Morgan Slade (1853-1882) was tasked with the job of removing the mansard roof and adding a further, seventh, floor. However, the plans did not go ahead and from 1883 the mansion was leased to the University Club. They commissioned Charles C. Haight (1841-1917) to convert the theater into the "New Dining Room," decorated by McKim, Mead & White, all of which was completed in 1889.

In 1899, the University Club decamped to the A.T. Stewart Mansion on Fifth Avenue and Jerome's became the new home of the Manhattan Club, popular with the Democrats. It was here in the bar that the cocktail bearing the club’s name was invented.

From Landmark to Landfill

In 1964, the club purchased the mansion from the Jerome estate and one year later it was designated a City Landmark: "distinguished and attractive... the Jerome Mansion is a priceless link for New York City to one of the great men of this century and... the building should be preserved so that New Yorkers will always have this physical reminder of Winston Churchill."

By 1965, membership was in decline and operating costs had the put club in the red. The mansion was put on the market for $600,000 but after 17 months without any takers and now being a Landmark, the Club filed suit against the city claiming it had been deprived its right to "dispose" (ie., demolish) it. When it became evident that it was no longer fit for purpose, the City demolished it in early 1968 and the New York Merchandise Mart was put up in its place.

The Manhattan: The Story of the First Modern Cocktail with Recipes By Philip Greene. Foreword by Dale DeGroff

Jennie: The Life of Lady Randolph Churchill By Ralph Martin

New York Cocktails: An Elegant Collection of over 100 Recipes Inspired by the Big Apple (City Cocktails) By Amanda Schuster