Built in 1774, for Captain Elijah Wadsworth (1747-1817) who was then unmarried and later served as a Major-General in the War of 1812. In 1810, he sold the house to the Rev. Lyman Beecher (1775-1863), Litchfield's Minister to the First Congregational Church, and in the following year Beecher's daughter Harriet Beecher Stowe - author of Uncle Tom's Cabin - was born here. Over time, Beecher almost doubled its size so that Harriet recalled her childhood home as a, “wide, roomy, windy edifice that seemed to have been built by a succession of afterthoughts". She lived here until the age of thirteen (1824) when she was sent to be educated at the Hartford Female Seminary. But, by then her father was already struggling to support his large family and in 1826 he sold up after accepting a larger salary to administer to Boston's Hanover Church....
zoom_in 1 images 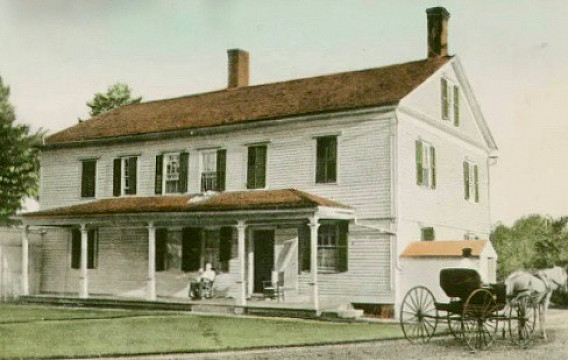 In 1872, the Litchfield house was moved by oxen to a new location and was first converted into a sanitarium before serving as a dormitory for Spring Hill School which then became the Forman School in 1930. It is thought that the house was moved once again to another part of their campus and certainly by then the interior had lost all resemblance to its 18th century roots. Its association with the Beecher family disappeared into obscurity until 1996 when the Forman School re-announced its famous origins and offered it for sale at $50,000. In the hope that a buyer could be found, the Connecticut Historical Commission placed it on the state's Register of Historic Places, but it was disposed of a year later for just a dollar after the Litchfield Historical Society declined to negotiate for it because, “there was not much left of it from the Beecher era".

The new owners, Chandler Saint and Stephen Solley, promised to rebuild the house in Litchfield as a museum open to the public. Saint deconstructed the house and tried more than valiantly to have find a new home for it, but his all his hard work came to nothing.

In 2001, an ugly furore erupted between Saint and many of the town's elite. He had found a site in Litchfield's historic district, but not everyone was delighted by the idea of a museum opening up in their backyard and he was ordered to move the trucks that contained the house off site. So ugly was the situation that, fearing arson, he placed the deconstructed house into storage in a secret location. Sometime before 2016, it was acquired by art dealer, Art Pappas, and a silent partner whose name he would not give. That year, they placed it for sale on eBay at the exorbitant sum of $14.5 million, before dropping it to $400,000 the following year. As of 2021, what remains of the Beecher House appears to still remain in storage, though in what condition remains a mystery.