Built in 1871, for Franklin Chamberlin (1821-1896) and his wife, Mary Porter (d.1908). They owned a large tract of the land that was once Nook Farm and sold this house to its most famous resident in 1873. When Abraham Lincoln met Harriet Beecher Stowe, he said with wry amusement, "so you're the little lady who started this great war". He was referring to the U.S. Civil War and the book that made her famous, Uncle Tom's Cabin - the best selling novel of the 19th century that had such a profound effect on the white populace's attitude towards African-Americans and slavery that it is openly acknowledged to have played a direct role in the sons of the Union taking up arms. For the last 23-years of her life, this was the home of that prodigious lady....
zoom_in 3 images 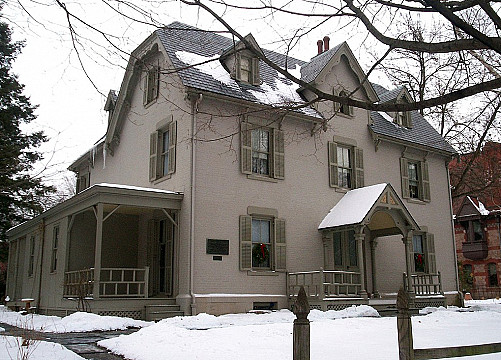 In 1864, Harriet's husband retired his Professorship at Andover, Massachusetts, and they moved back to Hartford into her dream, eight-gabled home into which she had ploughed the majority of the money she had made from her writing. Oakholm had taken two years to build and Harriet had overseen every facet of its construction, but just five years later they were forced to sell. Her funds had taken a direct hit in 1869 after she published a conversation that had taken place in 1853 between herself and Lady Byron who confided in her that her celebrated husband, Lord Byron, was guilty of incest with his half-sister.

Her accusation against such a literary luminary was met with a barrage of hostility from press and public alike, and despite the support of Mark Twain her book sales tumbled. Struggling to afford the upkeep of Oakholm, they moved out of the public eye to their winter home in Florida, Mandarin House. They sold Oakholm in 1870 and only returned north to Hartford once things had settled down, buying this house in 1873.

The architect of the 5,000-square foot house is unknown, but its design is typical of the architecture made famous by Andrew J. Downing and Calvert Vaux. Harriet lived her remaining 23-years here with her husband and their two unmarried twin daughters, Hattie and Eliza. She surrounded herself with a mixture of Victorian and late 18th century furniture, her own oil and watercolor paintings as well as art and souvenirs she had acquired on her travels in Europe. She wrote her last novel here, Poganuc People, and having outlived her husband died in her bedroom in 1896, surrounded by her family. The twins moved to Simsbury and sold the house to Hartford native Frances Z. Niles (1838-1922) who lived here with her unmarried niece, Caroline Hansell, and their two servants.

Frances Niles died in 1922 and two years later her niece placed the house on the market. Despite then living in New York City, when Harriet's grand-niece, Katharine Seymour Day, heard that it was up for sale she purchased it immediately and three years later (1927) moved back to Hartford and made the house her permanent home. In 1929, she organized "The Friends of Hartford" that raised $100,000 against strong opposition to save the Mark Twain House adjacent to her own home; and, in 1940 she bought the house that neighbored her own, now known as the Katharine Seymour Day House.

After Katherine died here in 1964, she bequeathed her entire estate to the Stowe-Day Memorial Library and Historical Foundation in order to see the house made into a museum celebrating the life and achievements of her great-aunt. It was restored in the late 1960s and is open to the public today as part of the Harriet Beecher Stowe Center.

A Key to Uncle Tom's Cabin: Presenting the Original Facts and Documents Upon Which the Story Is Founded By Harriet Beecher Stowe