Completed in 1902, for Dr Leslie Dodd Ward (1845-1910) and his wife Minnie Perry (1852-1906). Florham Park takes its name from Florham and Brooklake Park - the region's two principal estates in the early 20th century. Since 1958, this mansion and part of its original estate - including the championship golf course first laid out in 1921 - has served as a country club, known today as the Brooklake Country Club....
zoom_in 4 images 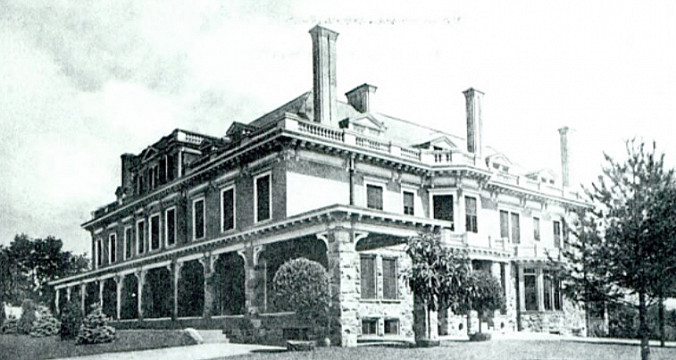 Ward's family were long established in New Jersey, his ancestors being among those who founded the City of Newark in 1666. Born at Afton, he received a degree in medicine and was County Physician of Essex County before helping John Fairfield Dryden (1839-1911) found the Prudential Life Insurance Company, of which he was its first Vice-President.

In 1883, the Wards purchased an estate of over 800-acres in Afton, on land comprised of rolling hills, meadows, virgin forests and farmland - all teeming with wild game. Nestled among within a picturesque setting, that same year they started work on their summer home. They named the estate "Brooklake Park" for the 12-acre purpose-built lake that the house overlooked. The lake was created by use of a dam and the Ward family used it for both boating and fishing. Sadly, the original house lasted barely a decade before it was lost to fire in 1895. However, by 1902 Ward completed a new 44-room, three-story stone mansion with a broad porch along the front facade offering a spectacular lake view.

Approached via a long drive, the extensive landscaped gardens contained fountains and pathways; and, Ward also laid out his own private golf course. Outbuildings included a carriage house and a boathouse on the lake. The most part of the estate was a working farm, known as "Brooklake Farms" and Ward built cottages for the groundsmen and farmers. There was a saw mill which supplied the timber that was used in the construction of the new mansion; and, a clocktower, which was the only original building to have survived the frie of 1895. Its chimes could be heard across the estate and from its viewing gallery at the top it was possible to see the skyline of New York City itself.

The other principal landowning family in the area were the Twomblys. In 1897, Hamilton McKown Twombly (1849-1910) and his wife Florence Adele Vanderbilt (1854-1952) completed Florham, their 102-room weekend retreat. In 1899, the Wards and the Twomblys succeeded in persuading the New Jersey Legislature to make Afton a borough, which was renamed Florham Park. The 'Park' was added in recognition of Ward's role.

In the latter years of his life Leslie Ward lived in London, where he died in 1910. His second son, Herbert, had made use of the house in his absence, but he predeceased his father. Leslie had set up various trusts to divide his estate equally between his only surviving son, Leslie P. Ward, and his only grandchild who was then just three years old, the future Mrs Helen (Ward) Dignan. In 1911, Leslie P. Ward was resident in England and auctioned off much of the furnishings. Three years later, he sold the 850-acre estate.

In 1914, Howard Cole, formerly of St. Louis, became the new owner of Brooklake Park. In 1921, his publicized his intentions of converting the estate into the "Madison Brook Country Club" with three 18-hole championship golf courses designed by Robert White to become, "one of the greatest all-the-year-round country club's in America". At that time, women were banned from playing on Saturdays, Sundays and holidays, but the Madison Club launched, "the wholly new and unique policy" of providing women with their own course from which men may be barred on Saturdays, Sundays and holidays!

Despite these lofty ambitions only one course was built, nonetheless on completion in 1924 it was regarded as, "as one of the most prestigious golf courses in the metropolitan area". The Depression and War led to the end of Cole's tenure at Brooklake and in 1943 the estate was purchased by Hans Knudsen Lorentzen (1887-1973), the successful founder of Levolor Blinds. Lorentzen initially intended to use the land for pasture but ended up carrying out well-needed renovations to the mansion, maintaining it until 1958.

In 1958, Lorentzen sold the estate to Colonel Salvatore A. Bontempo (1909-1989), Chairman of the New Jersey Democratic State Committee. Bontempo converted both the mansion and the park into a country club, originally known as the Braidburn Country Club. The clubhouse was soon afterwards extended; tennis courts (six indoor and four outdoor) were added; and, both indoor and outdoor swimming pools were built.

In 1985, the club was bought by a group of investors and since then it has been known as the Brooklake Country Club. As a private members club it continues to operate today; and, recent improvements include the renovations made to the golf course under the direction of Geoffrey Cornish and the addition of a health club and further dining rooms.

Saga of a Crossroads: Florham Park By Eleanor Weiss

The Search for the 50 Most Beautiful Golf Holes in New Jersey: A Tribute to New Jersey’s Contribution to the Beauty and Legacy of Golf in America By Dr John T. Whiting