Completed in 1897, for Hamilton McKown Twombly (1849-1910) and his wife Florence Adele Vanderbilt (1854–1952). Built by the sister of the men who put up The Breakers, Marble House etc., the Twombly's 102-room mansion - inspired by the "new" 17th century wing of an old English palace - was surrounded by parkland and a working farm. At 65,465-square feet, it is the 15th largest historic house in the United States, slightly behind Grey Towers Castle. Since 1958, Florham and 187 of its surrounding acres has been the centerpiece of the Madison Campus of Fairleigh Dickinson University....
zoom_in 20 images 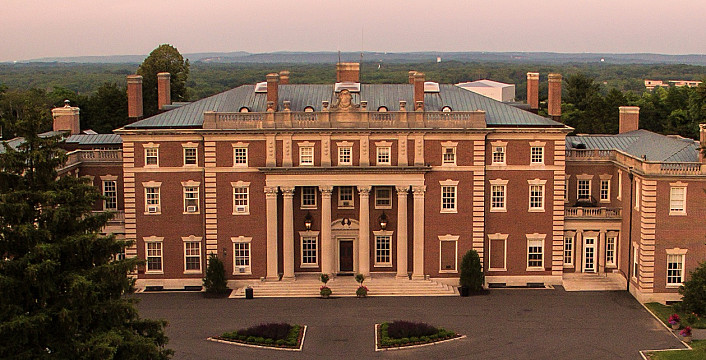 Twombly graduated from Harvard University. On becoming financial advisor to William Henry Vanderbilt (1821-1885), it was only natural that he was then invited to sit on the boards of many of America's most prosperous companies. Having secured himself a $20 million fortune, in time honored tradition the trusted adviser then married his boss' daughter, Florence. They wed in 1877 and between them they were now worth a combined $70 million. In 1894, the architect Charles McKim confided to a friend that, "Twombly wants a (third) house on the order of an English country gentleman," this was to be a weekend retreat to add to their Manhattan townhouse and summer cottage, Vinland.

Only 25-miles from Manhattan, the Twomblys first visited Afton (as Florham Park was previously known) in 1887 and by 1890 they had amassed an estate of 1,200 acres in the area. In 1894, inspired by the south front of Hampton Court Palace - as designed by Sir Christopher Wren (1632-1723) in 1689 for the English monarchs William and Mary - the Twomblys hired the celebrated trio of McKim, Mead & White to build their mansion.
Their 102-room country pile took three years to complete. They named it "Florham" which was an abbreviation of each of their first names - "Florence" and "Hamilton". It was positioned on one of the estate's many hills overlooking a nearby valley. It stood at the center of 160-acres of parkland designed by the Olmsted Brothers at a staggering cost of $2 million alone. To put that sum into perspective, that was in the days when a gardener earned $1 a day. The park was encapsulated by the remaining acreage that was given over to farming and so named 'Florham Farms'. Twombly hired the highly-respected dairy expert and former Congressman, Edward Burnett, to manage the farms and collaborated closely with Whitelaw Reid at Ophir, swapping ideas and staff to improve their estates.
In 1899, the Twomblys and their neighbour Dr Leslie Dodd Ward (1845-1910), of Brooklake Park, succeeded in persuading the New Jersey Legislature to make Afton a borough. It was renamed 'Florham Park' (the "Park" was added for Brooklake "Park"). This event was celebrated on July 4th that year when the Twomblys opened their grounds to 600 people, laying on food and a $2,000 firework display.

The Twomblys had an extension made to the railroad so that they could access their country estate directly from Manhattan. The stop serves a few more people today, but the journey by car is much the same: past the gate lodge at the end of a long, gravelled drive is the hulking red-brick and white trimmed mansion fronted by a portico of six Doric columns beneath the Twombly coat-of-arms set within the roof's stone balustrade.

Inside, perhaps the most imposing room is the 150-foot long marble entrance hall with its 8,000-pipe organ that ran to every room. It was decorated with twelve marble busts of Roman Caesars mounted on pedestals and two sets of pre-Gobelin tapestries (ten more hung in the drawing room) that depicted the tale of Rinaldo and Armida and were first presented by King Louis XIII of France to Cardinal Francesco Barberini of Rome in 1630.

The mansion's staircases and numerous fireplaces were also built of marble, and if not antique, they were all certainly hand-crafted by artisans brought over specifically from Italy. Doors were mahogany; the rooms were panelled in various woods (the billiard room was panelled in chestnut); and, the majority of the bedrooms (all with en-suite bathrooms) also had their own accompanying dressing rooms too.

The English 18th century-style carriage house was built of Belfast brick at a cost of $85,000. Before the dawn of the automobile, it housed 30 horses and various carriages. As times progressed, it sheltered the Twombly fleet of 15 Rolls-Royces - six in maroon (the Vanderbilt family's color of choice) and each with the Twombly coat-of-arms emblazoned on their side doors. The coachmen/chauffeurs and footmen were also liveried in maroon. In all, they employed a full-time staff of 126, including ground staff and 30 gardeners.

The grounds designed by the Olmsted Brothers incorporated terraces at the rear of the mansion that descended via marble steps to the sunken garden with ponds and fountains. The 160-acres of landscaped parkland included a multitude of flower beds, formal gardens and sweeping lawns. Trees include a great number of white oaks, gingkos and dawn redwoods, while over 100 species of birds have been counted on the estate as well as the deer, wild turkey and groundhogs that were also frequently seen.

Further behind the house were found 10 greenhouses, a Hackney stud farm and stables built on land that had to be dredged for two years before building could start - at a cost of $100,000. The working farm with 400-head of Guernsey dairy cattle was centered by a water tower with a large clock. This complex of neatly laid out buildings and barns was said to be the same size as the New York Post Office!

Aside from the gate lodge and carriage house, other principal outbuildings included the ivy-clad Orangery (demolished in 1996) that produced citrus fruits that included grapes, figs, nectarines and oranges for the Twombly's dining room table.

"The Playhouse" was erected by the Twombly's unmarried daughter, Ruth Vanderbilt Twombly (1885-1954). After her father's death in 1910, she accompanied her mother as they moved between Florham, Vinland and their Manhattan townhouse.

The Ladies of the Manor

Ruth and her mother lived happily alongside one another at Florham - there was certainly the room - but nonetheless they were careful not to step on one another's toes: they entertained their different sets of friends on alternate weekends; and, when Mrs Twombly hosted, the end of an evening was marked by the butler playing a rendition of Brahms' Lullaby on the organ, after which she would then retire to bed.

When her mother was entertaining, Ruth retreated to what had been - and was still referred to as - her 'playhouse': it was entered via a semi-circular columned portico and was in fact a fully self-contained house with a living room, kitchen, servant's quarters and den. There was also an indoor clay tennis court and, most impressive of all, an indoor swimming pool surrounded by exotic trees, shrubs, and frescoed walls.

The End of an Era

Considered frosty in her twilight years, Mrs Twombly nonetheless maintained her coronet as the undisputed queen of New York society and standards at Florham were as exacting as they always had been. She outlived her husband and two of her children and eventually died in Paris in 1952, the last surviving grand-daughter of "The Commodore" Cornelius Vanderbilt (1794-1877).

Florham, unsurprisingly, was left to her unmarried daughter, Ruth, but she too died just two years later. Ruth willed the estate to her only surviving sibling, Florence Vanderbilt Twombly (1881–1969), the widow of William Armistead Moale Burden (1877-1909).

Mrs Burden auctioned off the contents of the house in 1955. The mansion was left empty except for a small group of caretakers who kept it clean, but the outbuildings and gardens on the other hand began to fall into disrepair. In 1957, the Esso Research and Engineering Company purchased 650-acres of the estate's farmland and the following year the mansion and 187 of its acres (that included all the parkland) was acquired by Fairleigh Dickinson University.

The university opened its doors to students in the fall of 1958 and today Florham is the centerpiece of the Madison campus, housing classrooms, faculty offices and campus administrative operations. In 1990, the Friends of Florham was formed: "This volunteer organization assists university officials in preserving the historic elements of the campus. The Friends also sponsor lectures on historic landscape design, architecture and an ongoing restoration of Florham's period gardens".

Florham: The Lives of an American Estate By Friends of Florham & Fairleigh Dickinson University

Consuelo and Alva Vanderbilt: The Story of a Daughter and a Mother in the Gilded Age By Amanda Mackenzie Stuart

The Glitter and the Gold: The American Duchess—In Her Own Words By Consuelo Vanderbilt Balsan