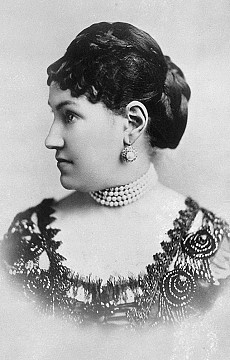 She was arguably the leading hostess of her era in Gilded Age New York. Together with Ward McAllister, they drew up The Four Hundred - the first American social register made up of 213 New York families and individuals whose moneyed lineage could be traced back at least three generations. She was the scion of several old New York families, but her husband's vast fortune was, conveniently, in its third generation! They were the parents of five children, a son (John Jacob Astor IV who was lost on the Titanic) and four daughters: (1) Emily, Mrs James Van Alen (2) Helen, Mrs James Roosevelt (3) Charlotte, married Haig then Drayton (4) Caroline, Mrs Marshall Orme Wilson.