Built from 1667, for Filippo Bon di San Barnabà (d.1712), the cultivated Procurator of St. Mark's who commissioned Baldassare Longhena (1597-1682), the greatest architect then working in Venice - and the greatest of its Baroque architects - to bring his palazzo into fruition. Longhena died in 1682 and works drew to a halt, after which neither Bon nor his sons nor grandsons (to whom it passed) had the funds necessary to complete it. In 1751, the incomplete, empty mansion was purchased by the merchant banker Giovanni Battista Rezzonico (1729-1783) who had just moved to Venice from Lombardy. He commissioned another of Venice's great architects, Giorgio Massari (1687-1766) to oversee its completion which was finally achieved in 1758, the same year in which Giovanni's brother, Carlo Rezzonico, was elected Pope Clement XIII. Today, this maginificent palazzo is home to the Venice Museum of the 18th century....
zoom_in 5 images 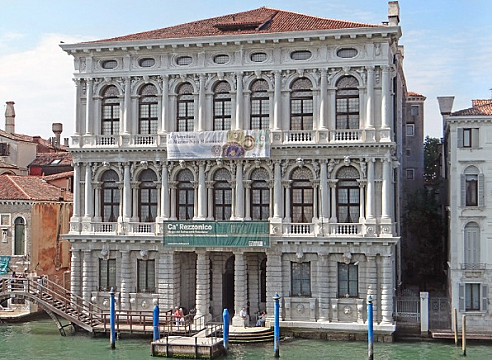 The palazzo was decorated by some of Venice's best known artists: Giambattista Crosato was responsible for the frescoes in the hall, having collaborated with Pietro Visconti and Giambattista Tiepolo who completed the two ceilings made in honor of the marriage in 1758 between Ludovico Rezzonico and Faustina Savorgnan. Despite the Rezzonico family's power and influence at this period it did not last and just 50-years later they had died out.

For the next century, the palazzo passed through several different hands and was poorly maintained. Its situation improved in 1887 when it was purchased and restored by the English artist, "Pen" Robert Barrett Browning and his wife, an American heiress, Fannie Coddington (1853-1935). Browning's famous father, the poet and playwright Robert Browning, died here two years later in 1889. The American painter James Abbott McNeill Whistler kept rooms here as did the American composer Cole Porter, and the Anglo-American painter John Singer Sargent kept a studio here. In 1906, the Brownings received an offer from the German Emperor Wilhelm II, but they turned him down and sold it instead to Count Lionello Hierschel de Minerbi. In 1935, after lengthy negotiations, he ceded it to the City of Venice and in the following year it was converted into a museum.

As the Venice Museum of the 18th century, it houses perhaps one of the finest collections of 18th-century fine and decorative art in the world. Containing furniture, paintings and decorative objects the interiors evoke the decadence of the period, complemented by a number of works by the likes of Tintoretto and Francesco Guardi. Along with the Ca' Pesaro, Ca' Rezzonico was used as the inspiration for the Joseph Pulitzer Mansion.

Frescoes of the Veneto: Venetian Palaces and Villas By Luca Sassi & Filippo Pedrocco

The Visitant: A Venetian Ghost Story By Megan Chance

City of Fortune: How Venice Ruled the Seas By Roger Crowley

Palaces in the Night: Whistler in Venice By Margaret F. MacDonald