Built in 1848, for Colonel Olivier Voutier (1796-1877) and his wife, Palmire Amable d'Alpuget (1828-1893). Voutier was the French Naval Officer who in 1820 excavated La Venus de Milo in Greece that is now one of the greatest treasures on display at the Louvre in Paris. From 1920, it was the spring and winter home of the American author Edith Wharton who finished The Age of Innocence here - the same book that saw her become the first woman to win the Pulitzer Prize for Literature. She named it "Sainte-Claire du Château" and filling the gardens with cacti and sub-tropical plants she created a magical Mediterranean paradise still enjoyed by countless visitors today....
zoom_in 6 images 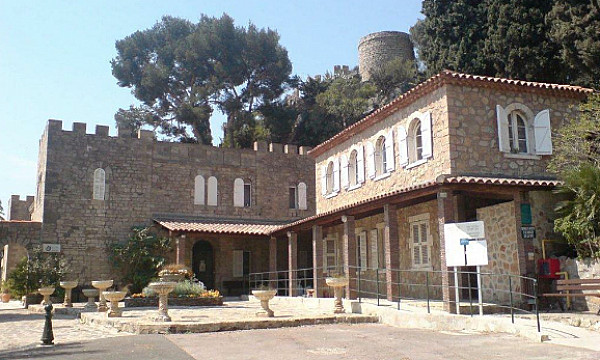 On retiring from the Navy, Voutier purchased the land on which a 17th century convent (Couvent des Clarisses) had stood until it was destroyed after the French Revolution. In the hills overlooking the old coastal town of Hyères and under the ruins of 12th century castle Voutier built his new classical chateau into the walls of the medieval castle and connected by a flight of stone steps to an old tower, the "Tour Sainte-Claire," from which it derives its name: "Castel Sainte-Claire". He was a close friend of the famous French painter Horace Vernet who had introduced him to the area and owned the adjacent property, but the legend that still bounces about that Vernet sold him the land is not true.

When Voutier died in 1877 he was buried in the gardens and his widow sold up to the Hedde family, owners of the Domaine de La Décapris in the nearby valley de Sauvebonne. In 1892, it was purchased by Alfred Rangon who sold it in 1912 to a chemical manufacturer, Laurent Guiol. In the same year, he placed it under the umbrella of his company SCI Hyerois that he then renamed SCI Sainte-Claire. However, the house sat empty and was falling into a bad state of repair when Edith Wharton accidentally stumbled upon it on holiday in 1918. She immediately fell in love and in 1920 secured a long lease on the property before buying it outright in 1927 for 1.25-million francs.

"Endless Beauty... For Miles and Miles"

In 1918, after the collapse of her marriage, Edith Wharton left America and her beloved home (The Mount) in Massachusetts for good. Having leased 53 Rue de Varennes in Paris from George W. Vanderbilt for five years she purchased the Pavillon Colombe in 1918. Renaming what would serve as her 'beloved' spring and winter home "Sainte-Claire du Château" she set about indulging her passions for architecture and design by meticulously restoring the house and creating the showpiece gardens that abound with citrus, olive and almond trees as well as with numerous varieties of cacti and sub-tropical plants.

It was the "endless beauty" of the view from Sainte-Claire that enraptured Edith, "for we look south, east and west, for miles and miles and our quiet-coloured end of evening presents us with a full moon standing over the tower of the great Romanesque church just below the house, and a sunset silhouetting the Iles d'Or in black on a sea of silver".

Edith died at the Pavillon Colombe in 1937 and being childless she bequeathed Sainte-Claire to her friend and secretary, Elisina Tyler, who died here in 1959. The property was then reclaimed by the town of Hyères and since 1989 the house has been home to the offices for Parc National de Port-Cros while the gardens are open daily to visitors for free.

Disarmed: The Story of the Venus de Milo By Gregory Curtis

French Riviera and Its Artists: Art, Literature, Love, and Life on the Côte d'Azur By John Baxter