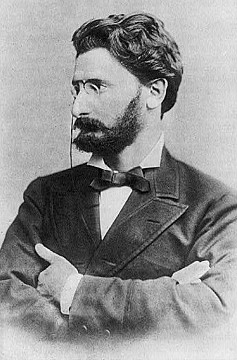 He was born into a Catholic/Jewish family in Hungary. He started life in the lap of luxury but after his father died the family lost their money. In 1864, Pultizer exchanged a free ticket to the States in return for conscription into the Union Army. After the war, he was homeless and broke but managed to make his way down to St. Louis where he took on various menial jobs until 1868 when he got his break as a reporter for a German-speaking newspaper, the Westliche Post. In 1870, his energy saw him elected to the Missouri House of Representatives - backing the 15th Amendment - and he became managing editor and part-owner of the Westliche. In 1878, he sold those shares and used the proceeds to buy the St. Louis Dispatch at auction for $2,500 before merging it with the St. Louis Post to create the Post-Dispatch. By 1881, it was yielding profits of $85,000/year. In 1883, Pulitzer went to New York and paid Jay Gould $346,000 for the New York World. Circulation grew rapidly as Pulitzer continued with the same practice that had made his paper so successful in St. Louis: sensationalist, eye-catching stories.

Championing the working man and leading crusades against corruption and big business, the World quickly became the largest newspaper in the U.S. with a readership of 600,000. Having originally been politically independent, Pultizer's backing of Democrat Grover Cleveland in 1884 was pivotal in his historically close Presidential victory over James G. Blaine. In the same year, Pulitzer was elected to the U.S. House of Representatives as a Democrat and led the campaign to keep the Statue of Liberty in New York. In 1887, the World was making $500,000 annually and that year he established a sister paper in New York, the Evening World, both of which he continued to run with the Post-Dispatch. In the late 1890s, William Randolph Hearst went head-to-head with him for dominance of the press. Their feud gave rise to Yellow Journalism but ultimately ended in a truce, both having lost millions in their fight. Another longtime adversary was Whitelaw Reid.

His voracious appetite for work later resulted in a nervous condition that left him completely blind. He died in 1911 with a fortune of $30.6 million. Through a bequest of $2 million to Columbia University he established Columbia's world-famous School of Journalism and in 1917 the university organized the Pulitzer Prizes in journalism which are now well-known for also recognizing achievements in literature, poetry, history, music and drama. The Pulitzer Fountain at Grand Army Plaza was erected in 1916 after his bequest of $50,000. Pulitzer's best-known residence is his Venetian mansion that still stands at 11 East 73rd Street in New York City. He also kept: a home at the Jekyll Island Club in Georgia; Chatwold at Bar Harbor, Maine; Villa Cynthia at Cap-Martin, France; a country estate at Lakewood, New Jersey; and a 268-foot yacht, Liberty, on which he died off Charleston. In 1878, he married the very pretty and well-to-do Kate Davis, but did not tell her that he was part Jewish (although he was agnostic) until afterwards, causing her considerable shock. They were the parents of 7-children, five of whom lived to adulthood.

Pulitzer: A Life in Politics, Print, and Power By James McGrath Morris

Who Was Joseph Pulitzer? A Novel By Terrence Crimmins

Joseph Pulitzer and William Randolph Hearst: The Lives and Careers of the Publishers Who Transformed the Media Industry By Charles River Editors