Completed in 1661, for the Superintendent of Finances under King Louis XIV, Nicolas Fouquet (1615-1680), Marquis de Belle-Île. A dedicated patron of the arts and close friend of the poet Molière, Fouquet spared no expense attracting France's three leading architects - Le Vau, Le Nôtre, and Le Brun - to collaborate on his new home that he intended to be a monument to France's prosperity and culture. Having bought and then demolished three villages on which to lay out the gardens, the displaced villagers became part of the 18,000 strong army of workers employed to maintain them. The Baroque masterpiece created here set the trend for Louis XIV architecture, but its magnificence was to be Fouquet's undoing. No sooner was the chateau complete, he was thrown into prison for misappropriating public funds and his wife was exiled....
zoom_in 14 images 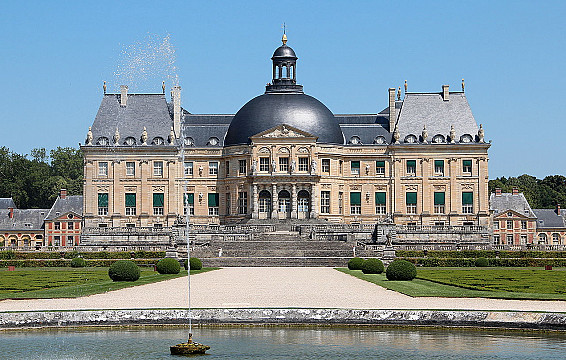 The chateau and its lavishness prompted Louis XIV to hire its three architects - Le Vau, Le Nôtre, and Le Brun - to build him the Palais of Versailles. Today, the chateau and gardens remain privately owned but have been open to the public since 1967. As one of France's most iconic "Monument Historique," Vaux-le-Vicomte attracts roughly 300,000-visitors a year. Its architecture has inspired countless chateaux but perhaps most interestingly Ernest-Paul Sanson's Carolands in California. Among the many movies in which it has featured was James Bond's Moonraker (1979) as the home of the fictional villain 'Hugo Drax,' named for the non-fictional Drax family of Drax Hall.