Built in 1838, for Daniel Joachim Coster (b.c.1804) and his wife Julia DeLancey (1806-1890). It stood on Edison Avenue and Greene Place at Throgg's Neck in the Bronx, which back then was part of Westchester County. In 1730, Mrs Coster's grandfather, Peter DeLancey, was willed "an extensive estate" in Westchester that her father then co-owned with her uncle, James, the High Sheriff of Westchester. Daniel was the son of one of New York's first five millionaires and the nephew of Henry A. Coster (1758-1820) who built the Coster-Phelps Mansion at Kip's Bay. Daniel modelled his mansion at Throgg's Neck after his uncle's, "one of the first show places of New York"....
zoom_in 1 images 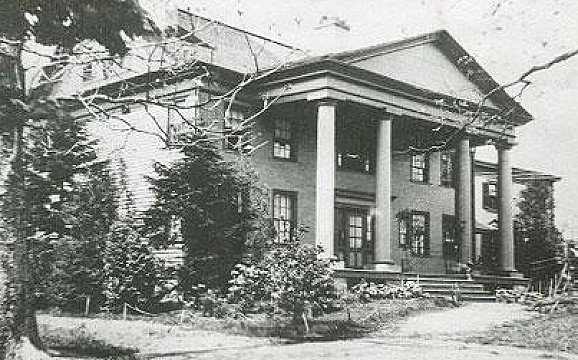 The Costers named their home "St. Adresse" and it stood at the center of a thriving orchard and a large flower garden. After they died, the it passed to their son, Harry Coster (1840-1917), but after his death it was broken up into 250 lots and sold off by his two children, Oliver and Martha. At the auction in 1920, the house and its remaining five-acres (containing 93 of the 250 lots) was purchased for $43,500 by William A. Cokeley and the entire sale netted $180,538. The Parish of St. Benedict's purchased the mansion in 1929 and demolished it in 1930 to build the St. Benedict School which stands in its place today.