Built in 1805, for Henry A. Coster (1758-1820) and his wife Magdalena Will (1773-1841). This was their country seat overlooking Kip's Bay and its gardens were said to be among the finest in America, rivalling those at the Bingham Mansion in Philadelphia. The mansion itself stood at what is now 1st Avenue at the corner of 30th Street, between 30th and 31st Streets. In 1835, it was sold to Anson Green Phelps (1781-1853), co-founder of the Phelps Dodge Corporation, who increased the estate to 30-acres. It is not to be confused with the other Coster Mansion built in 1838 at Throgg's Neck....
zoom_in 5 images 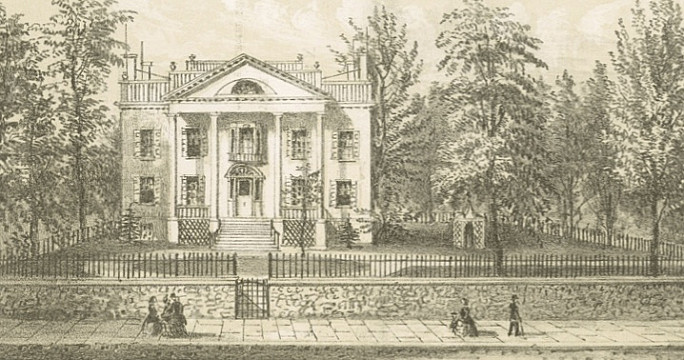 Henry A. Coster, Merchant, of the Brothers Coster, of New York City

Henry A. Coster came over from Holland shortly after the Revolution and was then joined by his brother, John G. Coster. They established themselves as import-export merchants and it wasn't long before they had their own ships going back and forth between New York and Europe with "supercargoes" of all kinds of produce. Henry was outlived by his brother who continued the firm's success and died in 1830 as one of New York's first five millionaires. Henry's widow, Magdalena, remarried the notable botanist Dr David Hosack.

"A Remnant of Paradise"

The estate was originally part of the old Kip's Bay Farm, but it was the Costers who, "planted the grounds with rare fruit, plants & trees". The house, "of old Colonial architecture" stood on a bluff and it was terraced down to the river. It was described as, "one of the first show places of New York" and certainly outshone the Astor Mansion.

The house stood two stories high with a basement and an attic. It was 52-feet wide and the east portico overlooking the river was 10-feet wide inside of the pillars. Both the bricks with which it was built and the floor tiles in the basement were brought over from Holland. Attached to the house was a large conservatory of rare fruits and flowers.

Outbuildings included, "hothouses, a gardener's lodge, stabling, a summer house and a boat house". The ice house was shaded by a Cedar of Lebanon that Coster was said to have brought from Mount Lebanon itself. It was the custom to have tea served on the east portico with its views over the lawn, garden, pasture, and river. In that era, it had neither neighbours nor roads, and you could travel for over two miles without seeing anything other than nature. A later occupant recalled it being, "a remnant of paradise".

Henry died here January 14, 1820. Five years later, his widow, Magdalena, remarried the notable and popular botanist Dr David Hosack, with whom she had been friendly for several years. Hosack and his children moved in with the Costers, though from 1828 they spent more time up at Hyde Park having bought what is now the Vanderbilt Mansion.
Anson G. Phelps...

By 1835, their estate at Kip's Bay had become surplus to the Hosack's requirements and in April that year they sold up to Anson Green Phelps (1781-1853), another of New York's pre-eminent merchants and the co-founder of the still extant Phelps Dodge Corporation. Phelps set about increasing the size of the estate through the purchase of several adjoining farms until it covered 30-acres: extending from Third Avenue to the East River, and from Twenty-ninth to half-way between Thirty-third and Thirty-fourth streets. In 1841, his son-in-law, James Boulter Stokes, built Clifton Cottage on the estate.

First Avenue and the streets around were not opened until about 1852, at which time the Phelps built a wall five-to-ten feet high surmounted by an iron fence on First Avenue and 30th and 31st streets. Phelps lived here happily with his wife, Olivia Egleston (1784-1859), and their six surviving children until he died in 1853. Mrs Phelps survived him by six years. Their children seemed to have retained the mansion and it was reportedly available to lease in 1864. It was still standing in 1868, "but was soon after demolished".