Built around 1760, on land owned by Captain John Bull (1693-1767), of Bull's Island. It might have been built by his widow, but it is more likely to have been built as a marital home for his second granddaughter, Mrs Elizabeth (Izard) Blake (d.1792), whose only sibling was then resident in the newly completed Miles Brewton House....
zoom_in 2 images 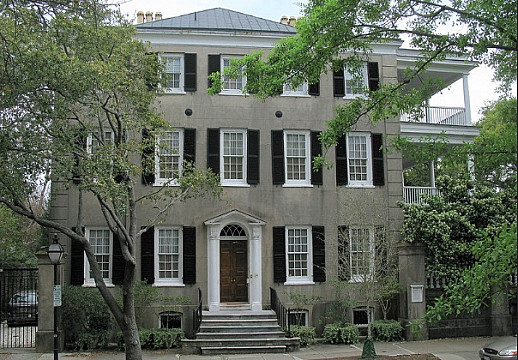 From 1763, Mrs Blake spent much time travelling in Europe and leased her townhouse to Lord William Campbell (1730-1778), the last Royal Governor of South Carolina, and his wife (Mrs Blake's first cousin), Lady Sarah (Izard) Campbell. The Campbells lived here until 1775 when they were forced to flee Charleston under cover of darkness to the HMS Tamar, ending British rule in South Carolina. In 1795, Mrs Blake's heirs sold the house to Colonel Lewis Morris (1754-1824). He lived here until 1818 when he sold it to his wife's nephew, Senator Daniel Elliott Huger (1779-1854) whose niece, Mrs Susan Dutilh, built Glenclyffe in upstate New York. His celebrated cousin, Francis Kinloch Huger (1773-1855) was almost killed on the doorstep when some masonry crumbled away and fractured his skull. In 1825, the Marquis de Lafayette (a great friend of the Hugers) was entertained here, and it is said that the house has remained in the Huger family ever since.

Architecturally, the house stands three-stories high. The heavy triple piazzas and stucco were most likely added to the original brick house after the earthquake of 1886. Upstairs, a pair of drawing rooms open up onto one another to take up the entire second floor. The house is richly detailed with 18th century mouldings and a beautiful mahogany bannister.

A Short History of Charleston By Robert N. Rosen