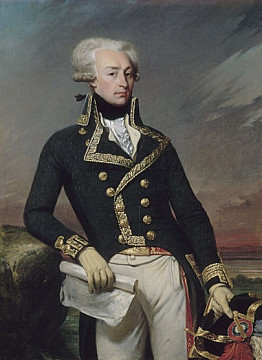 He was born at the Château de Chavaniac, in Chavaniac-Lafayette in the Auvergne (south central France) to an old and notable military family. His father was killed when France's invasion of Hanover was repelled at the Battle of Minden. From 1768, Gilbert was educated in Paris while living with his mother and great-grandfather in their apartments in the Luxembourg Palace. He was trained for a military career with the Musketeers, the King's personal horse guard, but after his marriage he moved to Versailles and transferred to his father-in-law's Dragoons.

From 1775, he began to identify with the American patriotic cause. But at that time England had threatened France with war if they interfered in America. Infuriating his superiors and despite pleas from his family and his wife, Lafayette bought and equipped his own ship, Victoire, and arrived in America in 1777. He and Washington immediately became firm friends and as he offered his military service for free and as one of the few French volunteers who could speak English, he was given the rank of Major-General.

His first action was at Brandywine where despite being shot in the leg and succumbing to superior numbers he impressed Washington and was given command of a division. Subsequent actions, such as at Rhode Island in 1778, saw him praised for his prudence and skill, but his requests to intensify the fight against the British elsewhere were ignored and he returned to France in 1779. Back in Paris, Benjamin Franklin praised him as America's most vocal supporter at the French Court and he secured a promise from the King to send further troops to aid the rebels. Returning to America in 1780, among other actions he was given command of an army to capture the traitor Benedict Arnold who was running amok in Virginia. He was unsuccessful, but his subsequent actions at Yorktown in 1781 forced Cornwallis to surrender and brought about the end of the conflict.

He returned to France as an advisor to American envoys in Europe. He was welcomed home as a hero and elevated to the rank of Marshal. He helped draw up trade treaties with the U.S. and joining the French abolitionist movement he strongly advocated bringing about an end to slavery. He returned to America in 1784-85 where he was also given a hero's welcome, earning his sobriquet: "The Hero of Two Worlds".

Back in France, he was appointed to the Assembly of Notables (1787) and to the Estates General (1789). After the Revolution, he established the National Constituent Assembly and with Jefferson's assistance helped write the "Declaration of the Rights of Man and of the Citizen". After the storming of the Bastille, he was appointed Commander-in-Chief of the National Guard and tried to steer a middle course through the years of Revolution.

In 1792, radicals called for his arrest and he escaped to the Austrian Netherlands only to be captured and imprisoned - considered a traitor for not saving the life of Marie-Antoinette. Although Napoleon secured his release in 1797, he refused to be part of his government and retired to the Chateau de La Grange-Bléneau which remained his home until his death. When the Bourbon monarchy was restored in 1814, he sat as a Liberal in the Chamber of Deputies until his death. In 1824, James Monroe invited him to the United States as the nation's guest. He toured all 24-states and was welcomed everywhere as a national hero. After the French Revolution of 1830, he helped give the throne to Louis-Philippe but as the new king became increasingly autocratic he retracted his support. He died in 1834 and is buried in Paris under soil taken from Bunker Hill.

While viewed today as a leading exponent of the Age of Enlightenment it was only relatively recently in France that historians saw him as anything other than a "doctrinaire simpleton". Marc Leepson summarized: "Lafayette was far from perfect. He was sometimes vain, naive, immature, and egocentric. But he consistently stuck to his ideals, even when doing so endangered his life and fortune. Those ideals proved to be the founding principles of two of the world's most enduring nations, the United States and France. That is a legacy that few military leaders, politicians, or statesmen can match".

Hero of Two Worlds: The Marquis de Lafayette in the Age of Revolution By Mike Duncan

Lafayette in the Somewhat United States By Sarah Vowell

Adopted Son: Washington, Lafayette, and the Friendship that Saved the Revolution By David A. Clary