Built 1813-15, for David Ross (1770-1837) K.C., and his wife, Jane Davidson (1789-1866). Overlooking the Champ de Mars, it stood between the also impressive Maison Beaubien and the old St. Gabriel Street Church. At the time of completion, it was perhaps the grandest townhouse in British North America. The octagonal summer house in the garden was considered the most beautiful in the country; and, the mansion's stucco interiors were the work of the principal ornamental plasterer to Charles Bulfinch during the construction of the Massachusetts State House. Although the house delighted Mr Ross, it was something of an embarrassment to his more Presbyterian wife and children. The Ross house stood as a Montreal landmark for just over 140-years before being erased in favour of a gas station. Some of the furnishings are now on display at the McCord Museum by virtue of its founder, Ross' grandson, David Ross McCord....
zoom_in 10 images 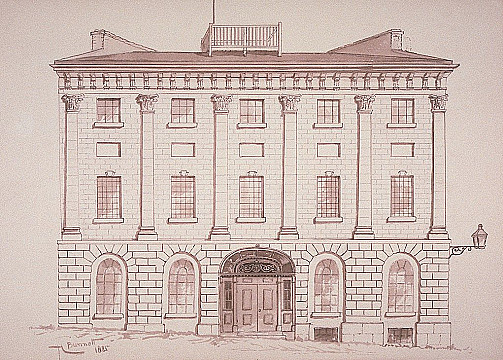 The Hon. John S. McCord, Judge of the Superior Court of Lower Canada

David Ross' father left Tain in Ross-shire with the 78th Fraser Highlanders and fought at the Battle of Quebec in 1759. Six years later, he bought a house near Palace Gate in Quebec City where David grew up. Having studied law, David came to Montreal where he married a daughter of Judge Arthur Davidson. His father-in-law died just four years later and he took over his legal practice as well as inheriting his Seigneury at St. Gilles de Beaurivage. Not before long, Ross was appointed a King's Counsel and successfully invested in property in Montreal before taking office as Attorney-General for the Province in 1820.

Started in 1813, his new home took two years to complete in the fashionable Neo-classical style: "Standing three storeys high, it had an ashlar (cut-stone) facade enriched by Palladian features - a frieze carved in an acanthus motif and six shallow pilasters crowned by Corinthian capitals above a rusticated ground floor. In each bay a plain, rectangular panel was inset between the second and third floors". Historians A.J.H. Richardson and Stephen Otto surmised that, "it may very well have been (then) the grandest town residence in British North America". It was not the largest, but in detail it certainly rivalled the Chateau de Vaudreuil and predated the Bingham Mansion.

It was built by the Englishman John Try who between 1812 and 1814 was also busy finishing the interior of the original Christ Church on Notre Dame Street. Try was then considered, "the principal master builder in Montreal" and although the architect of the Ross house is not recorded, he is regarded as the most likely candidate. However, the language used by Ross and his lead stucco-worker may point to another contender.

In 1814, Ross required special permission to bring Daniel Reynerd, "Architect and Stucco Worker," and Henry Roots, "Plasterer and Stucco Worker" to work on the project. Reynerd was an American but had learned his craft in England and was certainly no ordinary tradesman: Having established himself in Boston, he was the principal ornamental plasterer to "America's first native-born architect," Charles Bulfinch, most notably during the construction of the Massachusetts State House - "the most ambitious and costly building project undertaken in Boston at the close of the 18th century". Reynerd also co-published The American Builder's Companion with Asher Benjamin in 1806 which is still considered one of the most influential books of its era on American architecture.

The house would have been finished in considerably less time were it not for Canada then being at war with the States. This caused Reynerd a severe headache and in August, 1814, he wrote to the Governor's secretary: "I have experienced the greatest delays, distress and disappointment in finishing a house I have erected - near the Champ-de-Mars, owing to the scarcity of Plasterers insomuch that I am nearly stopped... John Try my head carpenter informs me that there are two most excellent workmen in Boston, that he thinks would be very glad to come into this province were they permitted to do so... In my present embarrassed situation I should be willing to go to the trouble and expense of getting them to come here... a temporary advantage to myself and a permanent one to this city."

I am not an architectural historian, nor do I have access to records that might help more clearly define Reynerd's role in the Ross project; but, certainly the language used in that letter - "a house I have erected... my head carpenter" - coupled with Ross' referral to him as "Architect & Stucco Worker" rather than just "Stucco Worker," might imply that Reynerd was more than just the stucco worker brought in towards the end of the project.

A Slice of "Belgravia" in Montreal

Although built by an Englishman, the house was designed for a Scotsman; and, Ross would have been unquestionably gratified by the fact that his house would have fitted seamlessly within Edinburgh's famed "New Town". In fact, the Ross house bears a distinct similarity to one such mansion on the corner of Moray Place and Forres Street - recently used as a filming location for "Belgravia," the follow-up series to "Downton Abbey".

Moray Place was designed by the Scottish architect James Gillespie Graham on behalf of Lord Moray in 1822 - a decade after Ross built his home. The house in Montreal was superior in its external detail, but despite their similarities there were two distinct architectural differences that set them apart: the front entrance of the house in Montreal took its inspiration from Georgian Dublin, with perhaps a hint of Paris; and, although not an original feature, the "Widow's Walk" seen in the picture on the crest of the roof in Montreal gave it a distinctly Colonial feel. It was added sometime between 1830 and 1866, though the addition was most likely made in the 1840s when they became popular.

The house itself cost £1,007 to build, but the ornate décor insisted upon by Ross also cost him something of a marital headache resulting in the only recorded rift in his marriage: Both being of Scottish origin, Mr and Mrs Ross were Presbyterians and as it transpired their new home stood directly next door to the old St. Gabriel Street Church - "the mother church of Presbyterianism in Canada".

The church had been built a few years before with the help of a handsome donation from Mr Ross; however, it was Mrs Ross who took the religion that preached simple living and plain tastes more seriously. The house alone (without including interiors nor furnishings) had cost just £43 less than the entire church that could sit a congregation of 650! And, although this was where all the fur barons worshipped - a group famous for "living in lordly and hospitable style" - Mrs Ross' mansion was glaringly conspicuous and she was no doubt sensitive to the inevitable sneers. Even their daughter, Mrs Anne McCord, mocked her father's aspirational home when she wrote to her husband in 1820: "I am seated in my apartment (which I need not tell you, is in the eastern turret of the castle)."

The interiors were completed by the firm of Forster & Try - 'Try' being the builder's younger brother, Charles, a cabinetmaker and upholsterer. In 1820, a traveller from England (John Bigbsy) remarked, "I found, but did not expect to find, at Montreal a pleasing transcript of the best form of London life... some of the show-shops rival those of London in their plate-glass windows". It was from those same shops that Ross acquired his own silver, plate, glass, and furnishings, plus those that he'd purchased from his late father-in-law which had once filled the Davidson home on St. James Street. Ross was most likely among those that Jacob Mountain had in mind when he observed in 1794 that, "people here (in Montreal) are fond of good living and take care to want no luxury".

A minimum of four servants were required to run the household; and, though, "relatives, friends, and colleagues came regularly to dinner, tea, and cards," the merriment here would have been on a decidedly lesser scale than in the likes of the Bingham Mansion.

"Famous Montreal Melon" & "the Most Beautiful Summer House in Canada"

In 1840, from the north-west corner of the Champ de Mars that looked directly towards the Ross' and Beaubien House there was, "a fine view of the grounds, beautiful orchards and country houses towards the Mountain". Among the fruits grown in the gardens at the Ross house was "the famous Montreal melon" which was gathered in clothes baskets.

In 1898, The Canadian Horticultural Magazine described the summer house that had stood in the Ross gardens as, "a delicately modelled octagon of about 16-feet in diameter, which had cost one hundred guineas (£105)". The author boldly deemed it to be, "certainly the most beautiful in Canada, and perhaps on the continent." It certainly would not have looked out of place on an estate such as Blithewood in New York's Hudson Valley, and it was later moved to "Temple Grove," the McCord's country idyll on the Côte-des-Neiges.

The Foresight of David Ross McCord... and an Undignified End

David Ross McCord was named for his maternal grandfather and is remembered today as the founder of the McCord Museum of Montreal. In 1871, he commissioned a photographer by the name of Alexander Henderson to picture the house - and his country home, Temple Grove - in detail within and without; and, in 1885, he commissioned Henry Bunnett to draw illustrations of the same. Fortunately these pictures are all preserved in the McCord Museum: the house was erased in 1952 to make way for a gas station and parking lot.

Scots in Canada By Jenni Calder

The Living Past of Montreal By R.D. Wilson & Eric McLean

The New Town of Edinburgh: An Architectural Celebration By Clarisse Godard Desmarest